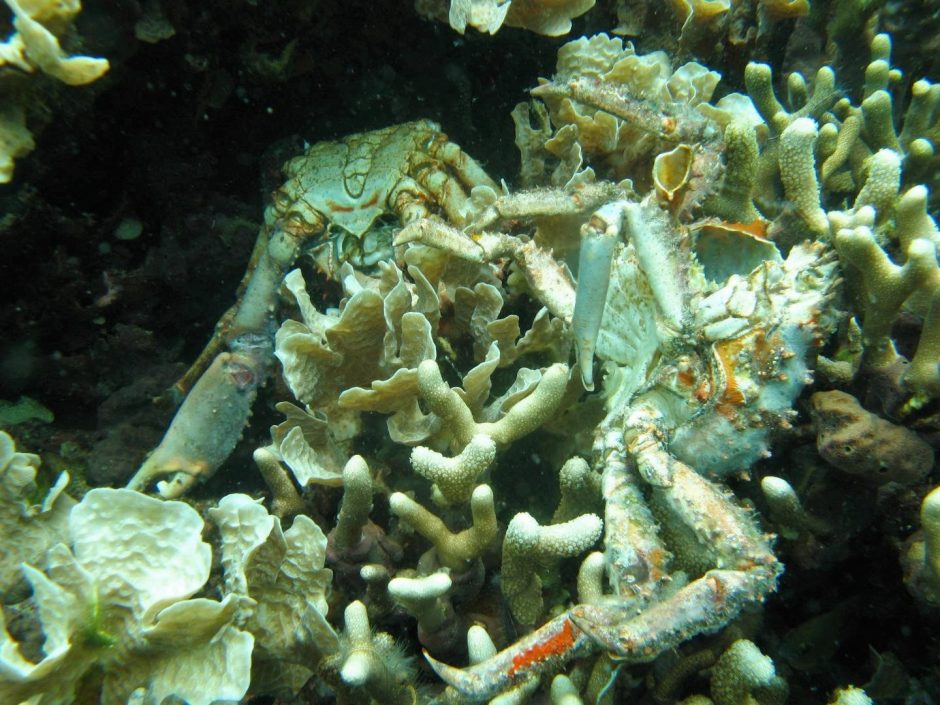 Low oxygen caused the death of these corals and others in Bocas del Toro, Panama. The dead crabs pictured also succumbed to the loss of dissolved oxygen. (Credit: Arcadio Castillo/Smithsonian)

A new research study from a Global Ocean Oxygen Network (GO2NE) team of scientists reveals that the number of low- and zero oxygen sites in the world’s oceans have increased dramatically in the past 50 years. The Intergovernmental Oceanographic Commission of the United Nations created the GO2NE working group to provide a multidisciplinary, global view of deoxygenation, with the end goal of advising policymakers on preserving marine resources by countering low oxygen.

This review paper is the first publication of its kind, which provides a detailed overview of the oxygen monitoring results various scientific teams have achieved worldwide. It offers a survey of the causes of oxygen depletion in our oceans, explains the consequences of the trend, and offers solutions to the problem in both coastal waters and the open ocean.

Over the past 50 years, the amount of zero oxygen water in the open ocean has more than quadrupled. Since 1950, low-oxygen sites in coastal waters including seas and estuaries have grown more than 10-fold. Scientists predict that oxygen levels will continue to decline as Earth’s climate warms, even outside these zones. Oxygen is essential to ocean life, and to all life on Earth—especially since about half of all oxygen on our planet comes from our oceans.

Denise Breitburg, the lead author of the recent study and a marine ecologist with the Smithsonian Environmental Research Center (SERC), hopes this research will educate both the scientific community and the public on the magnitude of the problem.

“People have known about low oxygen in coastal systems like estuaries for a long time, and it is often viewed as a local problem with local solutions,” comments Breitburg. “However, the scale of oxygen decline in the open ocean and coastal waters is truly global, and represents severe degradation of these ecosystems.”

“Dead zones” in both coastal waters and the open ocean contain too little oxygen to support most marine life, causing most species to suffocate and eventually die. Fish naturally avoid dead zones in order to survive, but this behavior also renders them more vulnerable to fishing and predators as their habitats shrink. And although some species can live and even thrive in dead zones, the overall effect of their growth is a drastic reduction in biodiversity.

Low-oxygen zones are spreading around the globe. Red dots mark places on the coast where oxygen has plummeted to 2 milligrams per liter or less, and blue areas mark zones with the same low-oxygen levels in the open ocean. (Credit: GO2NE working group. Data from World Ocean Atlas 2013 and provided by R. J. Diaz)

While these drops in oxygen are notable, oxygen declines of any size can harm the marine ecosystem. Insufficient oxygen levels in ocean water can hinder proper growth and development in many species, stifle or even prevent reproduction, and cause disease and potentially death. Low oxygen levels in oceans worldwide also harm the Earth’s atmosphere, causing dangerous chemicals such as nitrous oxide and toxic hydrogen sulfide to enter the air.

Climate change is the primary cause of the problem in the open ocean. As the waters on the ocean’s surface warm, it becomes more difficult for oxygen to penetrate into the deeper layers of the ocean. Warmer oceans also hold less oxygen. While warm temperatures also impact coastal waters, it is excessive nutrient pollution from the shore that is the most significant factor in these low-oxygen sites near the shore. This pollution fuels blooms of algae which then die and decompose, draining oxygen in the process. Ironically, animals need more oxygen to survive in warmer waters, even though less is available to them.

This recent GO2NE paper is actually a review of research from all over the world—some of it conducted by GO2NE team members.

“This is a review paper, so no new data were collected,” Breitburg explains. “However, all the authors involved are scientists who are experts in the field and use a wide range of instrumentation and numerical models in their work. Remotely deployed sensors, such as Argo floats, that record oxygen and other water quality parameters every few minutes for extended periods of time have greatly increased our understanding of temporal variability influencing organisms and biogeochemical processes, and our ability to detect short term episodes of severe oxygen depletion that can cause massive mortality of marine animals.”

In fact, the major advancements in the ability of scientists to monitor even smaller changes in oxygen levels over longer periods of time are directly responsible for these new results. For example, mobile platforms, which include floats, gliders, profiling systems, and powered autonomous underwater vehicles (AUVs) use optical oxygen sensors to provide observations across a broad swath of area over time. Scientists also use cabled observatories equipped with oxygen sensors, telemetering data to shore. Oxygen sensors are also used in remotely-operated and human-occupied-vehicles (ROVs and HOVs) surveying in deep water.

Certain moored sensors, such as ROV programs and cabled observatories, can even view oxygen conditions in real-time. Computer-controlled laboratory systems have also been developed that can simulate the high variability in oxygen and other environmental conditions on realistic (minutes-hours) time scales that organisms experience in shallow coastal systems.

“It took sensors that could detect small changes in oxygen and long term measurements to be able to detect these changes,” Breitburg states. While this is a serious problem, Breitburg and other team members believe that this problem can be solved by humanity if we take action now. The scientists argue that the world must attack the problem from three angles to manage the low oxygen issue: we must address the dual causes of climate change and nutrient pollution; we must protect vulnerable marine life; and we must improve our ability to track low-oxygen sites worldwide.

The scientific community owns this last problem. Brietburg and the team highlight the imperative to collect and analyze more data in situ to improve ocean management systems and more accurately predict the future conditions in our oceans.

“There are two particularly important needs,” Breitburg details. “First in the open ocean, wide-scale deployment of sensors that can detect small changes in oxygen are needed. The Argo float system is a good example of this, and should be expanded and sustained. In coastal systems, one need is increased monitoring in developing nations. This will require the development of inexpensive sensors that can withstand the rapid biofouling that is a problem in warm, nutrient-rich waters.”

Despite these challenges, Breitburg is confident in humankind’s ability to take on the low-oxygen problem and solve it. Only time will tell if we take enough effective action to manage things like nutrient pollution and climate change.