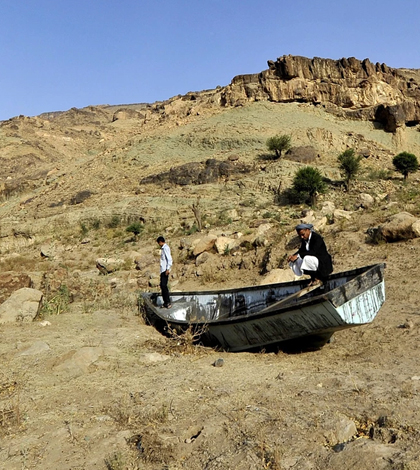 Two men inspect an abandoned boat in Yemen, one of the countries most affected by the scarcity of freshwater. (Credit: Yahya Arhab / EPA)

The growing scarcity of freshwater resources is more and more perceived as a risk for people around the world, according to a new study led by researchers at the Netherlands’ University of Twente. In the work, they report on the current state of those resources and the risk of going without water that populations face globally.

Scientists at the university examined global water scarcity by looking at data from 1996 to 2005 covering seasonal fluctuations in water consumption and availability. Researchers found that about two-thirds, or around 4 billion people, of the world’s population live under conditions of severe water scarcity at least one month out of the year.

Most of the people affected by diminished water resources live in India and China, scientists found. But, geographically speaking, large areas of Africa, Australia, Mexico and the United States also have water scarcity issues.

Full results of the study, including a map of vulnerable areas, are published online in the journal Science Advances.

Top image: Two men inspect an abandoned boat in Yemen, one of the countries most affected by the scarcity of freshwater. (Credit: Yahya Arhab / EPA)