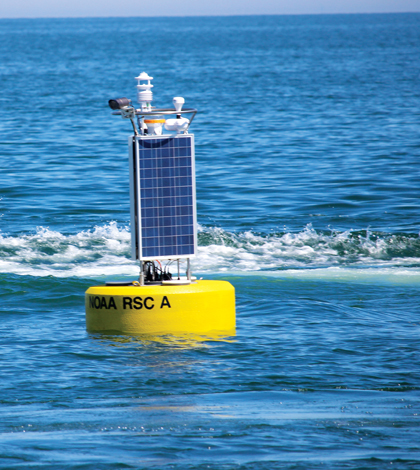 When a big thunderstorm rolled across the southern coast of Lake Erie at the end of May, the Regional Science Consortium’s data buoy off of Erie, Pennsylvania was there to capture it.

Jeanette Schnars, the executive director of the consortium, was in Toledo when the storm came through, but said that folks back in the office at the Tom Ridge Environmental Center were watching the real-time data from their nearshore buoy come in online.

“Some people here in the building were looking at it to see: Just how bad does this storm get?”

Wind speeds rose to 40 miles per hour, driving average wave heights of 6 to 7 feet. The highest individual waves were rising into the 10- to 15-foot range before spiking to a peak of 21.2 feet. Beyond data, the buoy also sent video from its camera. That was a pleasant surprise, Schnars said, because storms like this often disrupt the cellular signal enough to prevent transmission the video files.

The buoy also carries a suite of water quality sensors that captured the effects of the storm. Most notably, turbidity shot up as the wind and waves stirred up sediment. It rose from a days-long streak at zero NTUs before jumping quickly to 38 NTUs at 6:00 p.m. But by 10:00 a.m. the next morning, it had settled down to 4 NTUs.

“It’s interesting because it clears itself up relatively fast,” Schnars said. “That’s one thing we always say about the lake — things happen so quickly.” Turbidity is an especially important parameter measured by another fleet of buoys that the Regional Science Consortium operates near the beaches of Presque Isle State Park. They’re researching how data from those buoys can fit into their beach safety program that operates during the swimming season, which is already underway.

“It started Memorial Day weekend, which is crazy because the water temperature is mid-50s, low 60s,” she said. “So it’s still cold, but people go in the water. I don’t know why.”