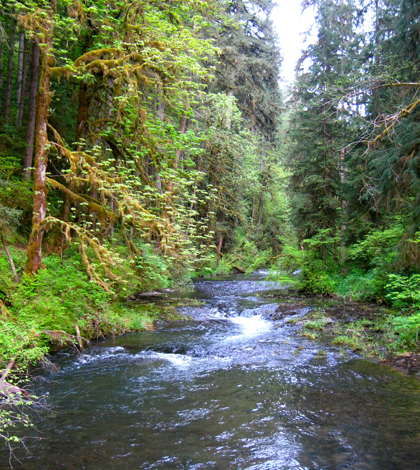 Nearly four years ago, I covered a study of stream temperatures in Oregon that found that water stayed cooler when logging operations left wider forested buffers along the streams.

The study found that, on average, streams didn’t warm at all after harvests on state land, where wider buffers are required compared with harvests in private forests. Stream temperatures on private land rose an average of 0.7 degrees Celsius — an increase that appeared to go beyond the maximum 0.3 degrees of post-harvest warming allowed by the state’s Department of Environmental Quality in fish-bearing streams.

When I talked to Liz Dent, the study author and scientist with Oregon Department of Forestry, about the study, she said the state’s Board of Forestry would consider the results when deciding whether wider buffers should also be required on private land in order to protect the cold water that salmon and trout need:

Oregon’s board of forestry will decide if the results warrant beefing up the buffer requirements. That decision won’t be easy, Dent said. Even though some private harvests warmed streams beyond the DEQ’s standard, the temperature increases were generally small, localized, and short-lived.

That is a hard place for a policy group to make a decision, Dent said.

“It looks like an easy decision if you say, ‘Well, they’re not meeting the DEQ water quality standard, that seems like a no-brainer,’” she said. “But it’s actually a lot more complicated than that.”

I recently checked in with Jeremy Groom, study co-author and monitoring coordinator with the forestry department. He said that in January 2012, the Board of Forestry ruled that there was “resource degradation” based on the 0.7-degree increase found in the study. That triggered a long rule revision process scientific review of all the relevant data they could get their hands on.

The forestry department also hosted more than 20 meetings, some public and some with private forest owners and conservation groups, to get comment on what could be done to keep the water cool. Groom also created a model based on data from the 2011 study to help predict what certain potential buffers sizes would do for stream temperatures.

The simulations produced a wide range of results that they’re preparing to show to the forestry board, Groom said. In the next few months, the board may come to a decision about changes could be made to protect cold water.

“It’s taken a long time to get to this point, but I would say that things are moving very quickly right now,” Groom said.