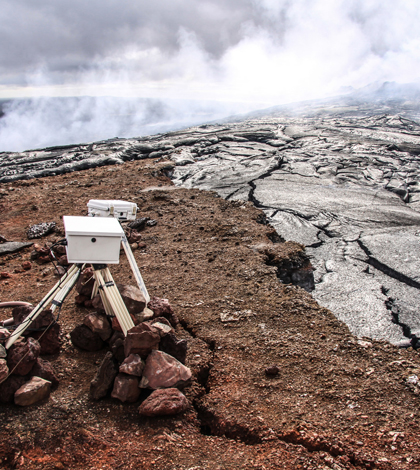 In the Summer 2014 print edition of the Environmental Monitor, we featured a photo of a laval flow from the Kīlauea Volcano on Hawaii’s Big Island creeping dangerously close to some U.S. Geological Survey’s monitoring equipment. As I wrote then:

“Nothing was damaged, but the cameras and other equipped were later moved to higher ground just to be safe. Kīlauea is in the midst of an ongoing eruption that began back on Jan. 3, 1983, making it one of the longest longest active eruptions on the planet.”

Things certainly haven’t quieted down since then. On June 27, a lava flow erupted from Kīlauea’s Pu‘u ‘O’o crater, began heading northeast, and continues flowing today. The cameras weren’t all so lucky this time. The camera’s housing melted, shown here in a Nov. 7 update from the USGS, but the electronics weren’t damaged. (Credit: USGS HVO)

Most of Kīlauea’s lava flows have historically moved south toward the ocean, where they’ve added more than 500 acres of new land since 1983. By flowing the other direction, the June 27 flow instead headed towards the town of Pãhoa. The lava isn’t an immediate threat to residents, according to a report from the Honolulu Star Advertiser. A branch of the flow that reached the town and destroyed one house stalled and is now inactive, but another “lobe” of the flow is taking a different route toward the town. The USGS Hawaiian Volcano Observatory said Friday that the leading edge of that lobe is around 1.8 miles from the town and advanced about 350 yards since Thursday.

The HVO is updating its online volcanic activity information daily, with slightly less frequent photo dispatches from the flow. The photo updates have produced some surreal and harrowing images that are worth scrolling through, but’ve picked out a few highlights below: Nov. 12: The lava destroyed the house in the center of the photo, but spared the garage, which still stands. (Credit: USGS HVO) Nov. 13: Lava passed through a chain-link fence into a transfer station, where it burned the asphalt. (Credit: USGS HVO)