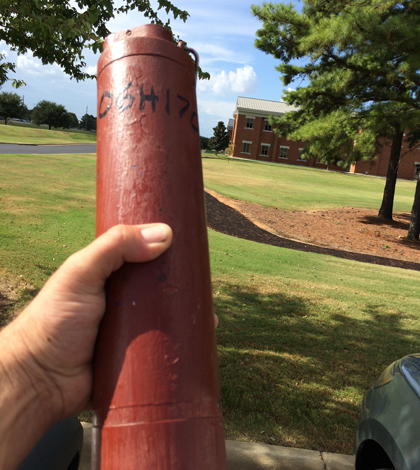 The wandering sonde safely in hand after Meiman picked it up in Mobile, Alabama. (Credit: Joe Meiman)

Anyone who spends enough time deploying environmental monitoring equipment understands that eventually, one of their instruments will likely end up missing. Well planned and secure installations can fail against curious passersby, outright vandals or even exposure to the elements. But with a little luck, the equipment sometimes finds its way home.

That was the case for wandering sonde originally deployed by the National Park Service in Spanish Cove within the Gulf Islands National Seashore. Kentucky-based NPS hydrologist Joe Meiman maintains a deployment of three YSI 6600 multi-parameter water quality sondes to monitor a seagrass bed in the cove with help from cooperators at the University of Western Florida.

“One day they called me up and said, ‘Hey, bad news. We went out to Spanish Cove and the data sonde is gone. The mount is gone, everything is gone. Gone, gone, gone,'” Meiman said.

Meiman works in the park service’s Inventory and Monitoring Program collecting data in 22 parks from Texas to North Carolina. It’s the sort of work that puts sondes through their paces, as he told the Environmental Monitor back in 2012. It has also prepared him to expect a sensor to go astray from time to time. So when he heard about the missing Spanish Cove sonde, he wrote it off as a faulty mount and moved on.

“That’s just part of the deal when you’ve got equipment out in the field,” he said. “You lose a few eventually.”

But it turns out, that was just the beginning of the story.

Someone vacationing on Perdido Key, an island that sits between the cove and the Gulf of Mexico, came across the sonde on a beach the Gulf side of the island. The beach combers kept it, apparently getting a kick out of watching the sensor wipers power up and move around. It eventually ended up in the hands of a family member who works at a wastewater treatment facility in Alabama. They handed it off to someone with the Alabama Department of Environmental Management who does wastewater treatment compliance sampling.

From there, the sonde moved up the chain to Gina Curvin, chief of the ADEM Aquatic Assessment Unit. She recognized it as a YSI sonde, and called the company with the serial number. The folks at YSI traced the unit as one sold through Fondriest Environmental, where general manager Paul Nieberding identified it as Meiman’s.

Meiman eventually made his way to Mobile, Alabama, where he reunited with the wayward sonde. But just how it was dislodged from the interior side of the island and made it over to the Gulf side remains a mystery. The cove is a pristine, protected area that prohibits combustion engines, so it’s unlikely that it was clipped by a boat and towed over there. It’s also unlikely that it got loose from its mount and floated through Pensacola Pass on its own.

“Somehow it ended up on the back side of the island. I have no idea how it got there,” Meiman said. “They’re not exactly the most buoyant things going.”

That’s the story of the wandering sonde as it stands today, though it’s not likely the end of its travels. Meiman’s sondes have been deployed in clear Appalachian streams while still sporting the anti-biofouling paint that baffled barnacles while it sat in a Gulf lagoon, so there’s no telling what ground it will cover before it’s retired or lost for good.

Top image: The wandering sonde safely in hand after Meiman picked it up in Mobile, Alabama. (Credit: Joe Meiman)