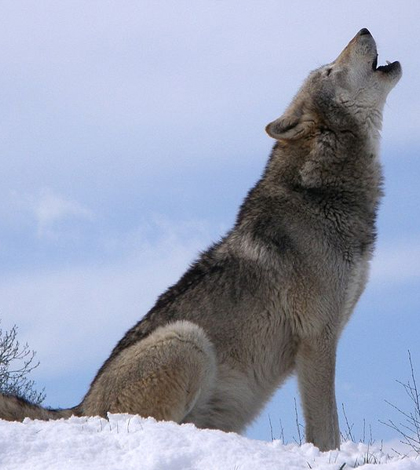 Dakota, a gray wolf at the UK Conservation Trust, howling on the top of a hill. (Credit: Retron)

Nearly 30 scientists and wildlife managers around the Great Lakes region have penned a letter to Sally Jewell, secretary of the U.S. Department of Interior, according to Science Mag. They are requesting that populations of gray wolves living in the basin be removed from the federal Endangered Species list.

The letter, sent in late November, makes the case for de-listing the Great Lakes populations of gray wolves. Among the positions that the writers take is the fact that gray wolf numbers, as of 2014, were above 3,700 — far surpassing an original recovery target set by the U.S. Fish and Wildlife Service of just 300, in 1992.

Those pushing for the delisting say that state wildlife agencies are equipped to manage the gray wolf populations and should be allowed to do so. They note that leaving a recovered animal on the list could give critics “ammo” to criticize the Endangered Species list as well.

Change to the gray wolves’ status is currently held up by a federal district court ruling blocking their removal from the list. The ruling is under appeal.

Top image: Dakota, a gray wolf at the UK Conservation Trust, howling on the top of a hill. (Credit: Retron)