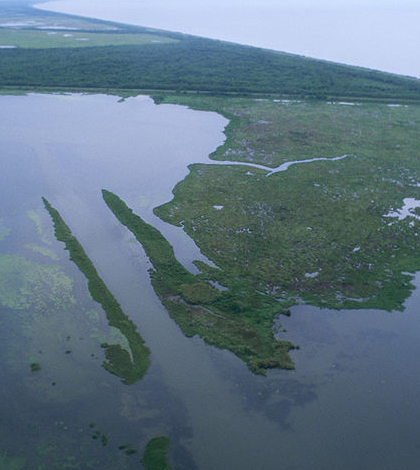 Tidal saline wetlands along the U.S. Gulf Coast, such as mangrove forests, salt marshes, and salt flats, face survival challenges as sea levels rise. These Gulf Coast wetlands are likewise threatened by development along coastlines that continues to grow.

But there is some hope for the at-risk wetlands, according to a study by scientists at the U.S. Geological Survey. The authors considered the potential for landward movement of Gulf Coast wetlands under different sea-level rise scenarios from 2012 to 2015. They also considered the impact of barriers to wetland migration due to current and future urbanization and examined how existing conservation lands, such as parks and refuges, might accommodate expected landward migration.

Historically, these Gulf Coast wetlands have been able to adjust to small fluctuations in sea level through natural processes that can increase their elevation. They have also been able to migrate inland when rapidly rising seas have overcome their ability to keep up.

But as coastal development increases – such as buildings, roads, parking lots and flood-prevention infrastructure like levees and seawalls – the paths that wetlands can take for inland migration may become blocked.

Investigators say that proper urban planning could greatly benefit these ecosystems. And the findings suggest that land managers may be able to ensure space for future wetland migration in a future of predicted rising seas. That’s key, as these wetlands need to be able to move so that people and wildlife don’t lose the beneficial functions they provide.

Water levels within tidal saline wetlands are dictated by tidal fluctuations and this unique environment is dominated by plant and animal species that live in salt water. The wetlands provide positive benefits for nature and society by serving as habitats for fish and wildlife, improving water quality and lessening flooding impacts. They also help to prop up coastal food webs, protect coastlines and provide recreational opportunities.

Full results of the study are published in the journal Frontiers in Ecology and the Environment.