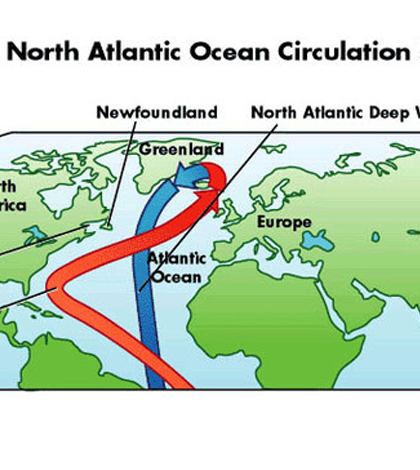 The Gulf Stream is weakening, which could have big impacts on ecosystems. (Credit: NASA)

Scientists at Penn State University say that weakened ocean currents responsible for carrying heated water to the Northern Hemisphere are leading to a slowdown in the Atlantic Ocean’s cycling, according to a release from the school. This could have impacts on marine ecosystems and sea levels.

Weather patterns in the U.S. and Europe may also be affected by the weaker currents, researchers say. There could also be effects on the Southern Hemisphere, as the currents are important for taking warm waters away from that region and moving cold waters toward it.

“If the slowdown of the Atlantic overturning continues, the impacts might be substantial,” said Stefan Rahmstorf, lead author of a study on the subject published in Nature Climate Change, in a statement. “Disturbing the circulation will likely have a negative effect on the ocean ecosystem, and thereby fisheries and the associated livelihoods of many people in coastal areas.”

Slowed Atlantic overturning adds to sea-level rises affecting cities like New York and Boston. And the temperature changes that come with it, he says, will have effects on weather systems on both sides of the Atlantic.

Top image: The Gulf Stream is weakening, which could have big impacts on ecosystems. (Credit: NASA)