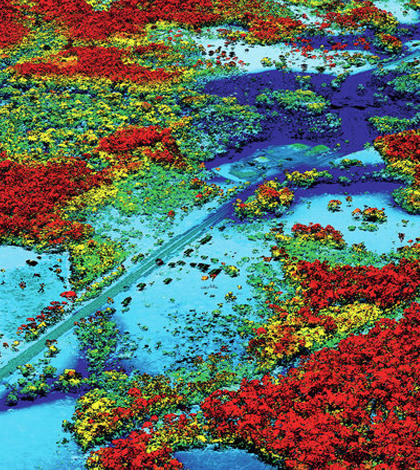 A scan produced by the airborne lab. (Credit: Gregory Asner)

An ecologist at the Carnegie Institute for Science has developed one of the world’s most advanced airborne laboratories for studying forests, according to National Public Radio. Housed in an old German warplane, the lab provides fast and high-resolution surveys of some of the world’s most important forests, including the Amazon.

Gregory Asner is the lab’s pioneering scientist, and his studies so far have aided understanding of the destructive effects humans have on land as well as advanced the field of ecological surveying. This is because his combination of mapping technology, what he calls the Airborne Taxonomic Mapping System, or AToMS, doesn’t see just green masses of forests. It can see all the way down to the branches of individual trees.

Still, some ground-based field work is helpful for animals and insects that are even smaller and harder to see.

“You still need to have a biologist on the ground like myself trying to count monkeys and butterflies,” said William Laurance, professor at the Centre for Tropical Environmental and Sustainability Science at James Cook University, to NPR.

But Asner’s system has proven important to helping the world learn about and protect tropical forests. His findings have served as the basis for international partnerships looking to conserve forests in Peru and the Brazilian Amazon. The AToMS will also be used in upcoming scans of Ecuador, as well as others to help Malaysia restore its depleted forest lands.