In-Home Water Testing: A Talk With the Creator of Tap Score by SimpleWater 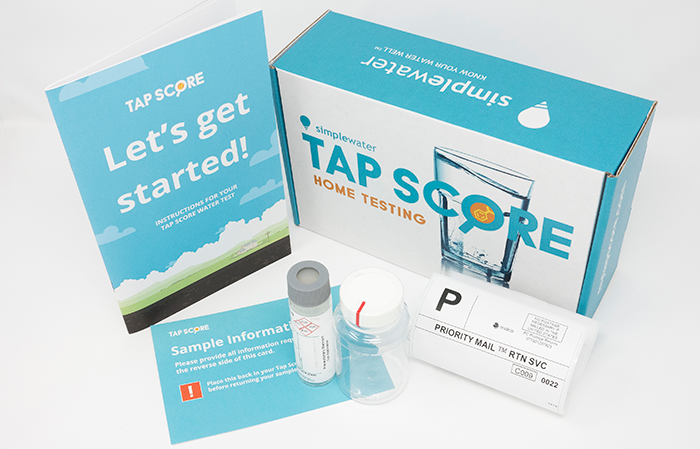 In the wake of various water quality crises from Flint, Michigan and Puerto Rico, there is a growing interest and demand among consumers for home water testing. Enter DIY water testing kits like Tap Score by SimpleWater.

Tap Score in particular was conceived of and launched by former UC Berkeley grad student John Pujol and co-founder and CTO Julio Rodriguez.

“In 2015 we began testing small and rural communities for arsenic in their water,” Pujol explains. “We found it much more frequently than we expected, and also discovered that people in these towns greatly appreciated someone telling them what was in their water and how to fix it. Home water testing has never been made very accessible to American families, so we set out to make an easy water test with clear and super informative results and treatment recommendations.”

Pujol had every personal reason to feel compelled to improve water quality, because for him, the problem started at home.

“One very unfortunate example of why we are so committed to improving home lab testing is the story of my own mother, whose early-onset Alzheimer’s disease came as a big surprise to my family,” Pujol confides. “Of course we may never know for sure what caused her to get the disease, but we did run a water test on her home and found that the water she’d been drinking for most of her life had greatly elevated levels of several heavy metals associated with neurological damage. That was definitely a motivator for me.”

Anatomy of a water test

Tap Score allows users to test for more than 100 regulated and emerging contaminants common in US drinking water, including copper, arsenic, and lead. Consumers can order it online, and get it shipped to their homes. It arrives with a kit of materials and instructions, and guides users through filling sample vials at their taps and documenting the time and date of their samples. They ship their samples back in, and 10 business days later (or less), their results are back.

“We have a slightly different philosophy than most,” Pujol clarifies. “Too many households never test their water or know what’s in it because of the complexity and cost. There is a chance that our customers will make an error in sampling, but we mitigate this as best we can by providing super clear instructions and engaging them closely while they purchase their water test, collect their samples and interpret their results.”

He adds, “We believe that more testing is better than no testing at all.”

While the final results that reach users are pretty easy to understand, the testing and analysis is still up to rigorous standards. “Once in the lab, Tap Score testing relies on standard water industry testing methods such as EPA methods 200.7, 200.8, and 300.1 to analyze water samples for metals, volatile organics, semi-volatiles, physical parameters, and other specialized chemicals,” Pujol details. “Each parameter in the results is compared against a database of toxicological and epidemiological data including health standards, effects, and treatment implications. The final report to the customer breaks-down the science into easy and actionable information, including health risks, treatment recommendations, nearby water quality results, and links to reference materials.”

SimpleWater sends the user’s water quality results to them, along with an analysis of personal health risks, local risk mapping, and recommendations for optimized treatment. Users can follow up on what’s in the report itself with SimpleWater by phone or email if they want to.

DIY testing: what happens next?

Once the user has the results, the next steps aren’t always obvious. For a private well user the burden is on them to remediate any problems, and this can be a costly process. For city users, however, while it may seem like cost to fix problems is out of the consumer’s hands, this isn’t always the case. Users often detect something in the water that they believe is originating from the public water system, but their municipality will tell them that it’s a use point problem.

“This happens all the time,” Pujol comments. “Customers will see high metal concentrations in their water and so they think there’s something wrong at the local water utility. However, it is most often the case that the customer’s home or nearby plumbing contains old metal pipes and fixtures. We normally can narrow down the source based upon the questions we ask in our surveys and the information from the local water utility and other tests nearby.”

From there, consumers can take steps to fix the problem, wherever it originates. And if the testing and all of the other information suggests that it’s not a use point issue, the consumer can approach their municipality armed with data.

In some cases, the testing might find contaminants at levels which are legal, but not healthy.

“Sometimes there are issues with contaminants like arsenic which we may detect at a level significantly higher than the recommended health goal, but lower than the federal arsenic maximum contaminant level (which is what guides public water system standards),” Pujol explains. “In these cases we explain the research to the customer and let them choose what they want to do. If they want to reduce their arsenic levels to near 0, then we offer treatment solutions that will do that.”

Many consumers are of the mindset that any water that comes out of the tap “has to” be safe, but Pujol says this just isn’t so.

“Arsenic levels are often much worse than people expect. Concentrations of other metals like copper, cadmium, aluminum, and nickel are often higher than people expect, and usually it’s because there was some plumber nearby in the 1970s who ran afoul of all the local plumbing standards.”

“A lot of urban customers are unhappy when they read how many chlorine disinfection byproducts are detected in their tap water,” Pujol adds. “Sometimes we determine that skin irritation felt in the hot shower is due to chlorinated compounds.” “There are always newfangled chemicals that do not yet have affordable lab testing standards in place,” Pujol cautions. “A great example is GenX which was spilled into the river waters of North Carolina and caused great alarm earlier this year. However, we do push the envelope by testing for many emerging contaminants like personal care products, pharmaceuticals, PFOAs, haloacetic acids, and more.”

Pujol is no herald of doom, but he does think DIY testing is going to be important to maintaining better water quality in the near future.

“Nobody likes going to the doctor to run tests, and nobody should naively wait for town hall to solve all of their problems,” Pujol asserts. “As costs of home-based lab testing fall and the future for health and environmental regulations grows more uncertain, I believe that people everywhere can help themselves far more easily by taking some matters into their own hands, especially long term health and preventative care. Home-based lab testing already offers many personal, easy, and affordable answers to important health questions—more every year.”

And beyond that, Pujol sees social benefits to conducting in-home testing:

“We want to make the environment more personal for people by connecting it to their health. I think that during this course of providing great home testing services we will encourage a deeper appreciation for citizen science, long term well being and environmental stewardship.”