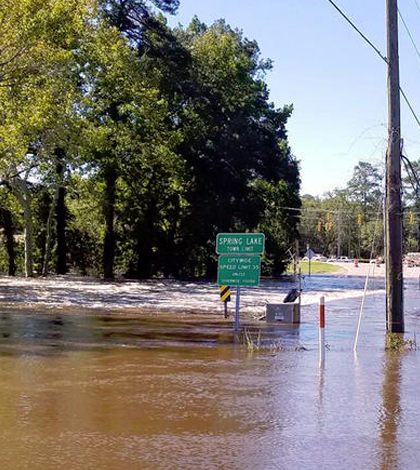 Heavy rains caused by Hurricane Matthew have contributed to new records for U.S. Geological Survey (USGS) streamgages, according to a release. But even before the storm got there, rains that fell days before helped to add even more water.

Period-of-record peaks associated with rainfall from Hurricane Matthew were seen in the Neuse, Cape Fear and Lumber River Basins as of Oct. 12. Some sites on the Lumber, Tar, Neuse and Cape Fear Rivers were still rising.

As Hurricane Matthew hit, 20 USGS scientists across the state were in the field making streamflow measurements to calibrate gages. Other USGS crews were working to recover storm-tide sensors, which were deployed to record Hurricane Matthew’s coastal impacts.

They were also performing maintenance to make sure that river stage and streamflow data continued to flow in real time. Eight of nearly 260 streamgages across the state were impacted or damaged by floodwaters. And crews have had to repair at least six to get them back up and running.

USGS scientists say that river height is an important measure to document, but that info on discharge is more useful in predicting flood severity. The discharge rate, or streamflow, marks how much streamflow is moving over an area each second.