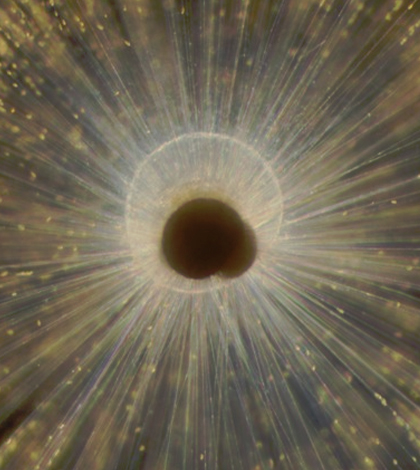 In sediment samples taken throughout the world’s oceans, researchers key on shell fragments from single-celled organisms to learn more about the history of an area’s chemistry. But surprisingly little is known about how these organisms form their shells in the first place.

In a bid to alleviate some uncertainty, scientists at the University of Washington have imaged some of the actions that take place. As a starting point, the researchers have zeroed in specifically on the time period during which single-celled organisms first start to form their shells.

The researchers caught juvenile foraminifera by diving in deep water off Southern California. They then raised them in the lab, using tiny pipettes to feed them brine shrimp during their weeklong lives.

Marine shells are made from calcium carbonate, drawing the calcium and carbon from surrounding seawater. But the animal first grows a soft template for the mineral to grow over. Because this template is trapped within the growing skeleton, it acts as a snapshot of the chemical conditions during the first part of skeletal growth.

To capture that, investigators analyzed tiny sections of foraminifera template with a technique called atom probe tomography at the Pacific Northwest National Laboratory. That allowed scientists to create an atom-by-atom picture of the organism’s shell template.

Results show that the template contains more magnesium and sodium atoms than expected, and that this could influence how the mineral in the shell begins to grow around it. The findings could eventually help understand how organisms at the base of the marine food chain will respond to more acidic waters.

The study looked at just one organism, Orbulina universa, a type of foraminifera. But investigators believe that the same methods could be applied to other plankton, corals and shellfish. Scientists at Columbia University and University of California – Davis also assisted. Full results of the work are published in Proceedings of the National Academy of Sciences.