Impact of Microorganisms in Fracking Processes May Have Been Underestimated 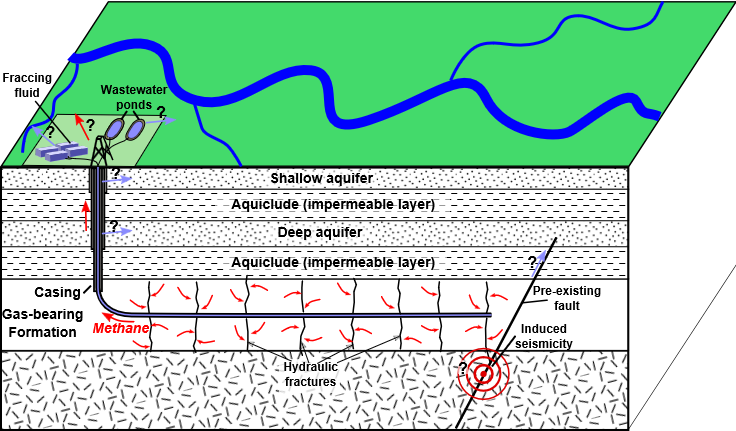 Processes surrounding unconventional oil and gas extraction or hydraulic fracturing—in lay terms, fracking—have become a controversial topic in many circles. As with any such subject, it’s up to scientists and engineers to elucidate the facts and present unbiased evidence so policymakers and the public can make better, evidence-based decisions. This is the mission of the Collaborative Laboratories for Environmental Analysis and Remediation (CLEAR) at the University of Texas, Arlington, and now in three recent studies the CLEAR team has revealed that the impact of microorganisms in groundwater near fracking sites may be much more important than previously thought.

In almost all debates about contamination of water and fracking to date, chemical contaminants are contemplated—not harmful microorganisms. However, new research from CLEAR seems to indicate that this has been an oversight, and that where chemical contaminants exist, pathogenic bacteria often thrive. All three recent UTA studies found harmful pathogenic bacteria in groundwater near fracking sites.

“All three of these studies were coordinated by the Collaborative Laboratories for Environmental Analysis and Remediation (CLEAR) at UT-Arlington,” explains Dr. Hildenbrand. “Collectively, these studies constitute a new area of interest, which is the monitoring and treatment of biological contamination of freshwater and anthropogenic wastes. Two of these studies covered confirmed or anecdotal claims of groundwater contamination in the Barnett Shale region of North Texas, where as the third study was performed as a reconnaissance analysis in the Eagle Ford region of southern Texas. All of the groundwaters that were analyzed in these studies were collected from private water wells.”

The three sites and studies were conducted in tandem as part of a larger overall goal, as Ines Santos, UTA postdoctoral fellow in Chemistry and Biochemistry, explains.

“These sites were chosen to assess the impact of anthropogenic activities on the groundwater microbial communities,” Dr. Santos describes. “We wanted to study how the chemical contamination changes the bacteria present in water and what are the impacts of those changes both in a biogeochemistry and human health point of view.”

The research found that harmful bacteria are at times “prevalent” in Texas groundwater, particularly where chemical contaminants exist. Kevin Schug, Shimadzu Distinguished Professor of Analytical Chemistry and Director of UTA’s CLEAR Lab, characterizes what this means, and why harmful bacteria are more likely to occur where chemical contaminants exist.

“The dynamics of the microbiological populations in environmental samples is very complex,” Dr. Schug explains. “Pathogenic bacteria are everywhere; however, it appears that in some cases, when water quality is compromised, that this increases the proliferation of some bacteria, and some of these are the pathogenic ones. Much is already known about many of these bacteria, and many of them will thrive under conditions of altered water quality, such as the high natural gas concentrations or increased salinities found in some of the water wells examined in these works.”

Dr. Santos adds, “Opportunistic pathogenic bacteria can be found anywhere; however, by changing the water composition through anthropogenic contamination we may be promoting the growth of these type of bacteria which can pose a risk if not controlled.”

Moving toward the next research phase

The evaluation of novel treatments against the dangerous pathogens and development of safe remediation strategies is the next phase of this work, which has already begun.

“We have begun working on novel remediation therapies that are designed to treat these pathogens without chemicals,” asserts Dr. Hildenbrand. “We have had to think outside of the box, because we are seeing that a number of these bacteria are resistant to various antibiotics, and are resilient against chlorination and other traditional disinfection modalities.”

The fact that these pathogenic bacteria can thrive in contaminated conditions and resist traditional treatment strategies should suggest several things to water managers and policymakers.

“These data indicate that traditional forms of disinfection may not be sufficient under all circumstances,” Dr. Hildenbrand cautions. “With that being said, the pathogens that we are detecting out in the field are beyond the purview of the current drinking water standards, so operators of public water supply wells who are required to screen for E. Coli and fecal coli form on a quarterly basis may think that they are thoroughly disinfecting their water when in fact they may not be killing the more resilient bacteria. Collectively these data suggest that federal and state drinking water standards should be expanded upon to include more bacterial species, and that we should explore alternative treatment methods beyond simple chlorination.”

The third study identified two unique species of bacteria that showed a capacity to degrade toluene and chloroform, and therefore could be exploited for the bioremediation of groundwaters contaminated with chemical solvents. There is more than one answer to how this discovery might be applied.

“Bioremediation using bacteria is quite a common practice,” Dr. Schug comments. “These bacteria were found in an environment containing abnormal amounts of organic compounds, and upon closer study, we found that they could use these as a carbon source. Further studies would be needed to determine whether these bacteria could be exploited more broadly for a more traditional type of bioremediation.”

“These bacteria may have more of a practical application in the treatment of produced anthropogenic wastes,” states Dr. Hildenbrand. “For example, produced water from unconventional oil and gas development is an incredibly complex milieu of organic compounds that could be treated with bacteria like these as a cost-effective alternative to carbon sequestration or membrane filtration.”

“First of all, if these waters are contaminated and since these bacteria were identified in situ, we would just have to stimulate these microorganisms by feeding them with nutrients and oxygen to increase their metabolic activity and they would degrade toluene and chloroform in a natural way,” Dr. Santos clarifies. “In case there is another site that is contaminated with these type of compounds, we can add the bacteria to the site and again provide them with the optimal conditions to make sure they are metabolically active and degrade the contaminants.” One of the notable facts about this research is the role mass spectrometry played in the work.

“Another interesting point of our research is the use of mass spectrometry for the identification of bacteria,” Dr. Santos explains. “The technique used, MALDI-TOF MS, can be a workhorse in the environmental field as it provides a good alternative when compared to the current techniques used for bacterial identification and monitoring.”

Even more significant, of course, is the illumination of the role microorganisms appear to be playing near fracking sites.

“Another important point of our research lays in the fact that the impact of microorganisms in the unconventional oil and gas development processes has clearly been underestimated,” points out Dr. Santos. “Therefore, advanced techniques like the one we show, are important to help in the analysis of bacterial communities either in the process itself or surrounding environments. Understanding these communities provides important functional knowledge and can help decision makers by informing them on pertinent issues such as contamination.”

“We believe that this research is pertinent to all walks of life given the importance of clean water,” asserts Dr. Hildenbrand. “What we have unearthed here is that pathogenic bacteria are quite prevalent in groundwater and if these harmful contaminants are left untreated then those in contact with those waters can experience significant health abnormalities that can affect skin and the gastrointestinal system. Collectively, we are talking about the interface between science and engineering here as we need to better understand the breadth of bacterial contamination in fresh water resources in addition to developing more effective treatment options.”