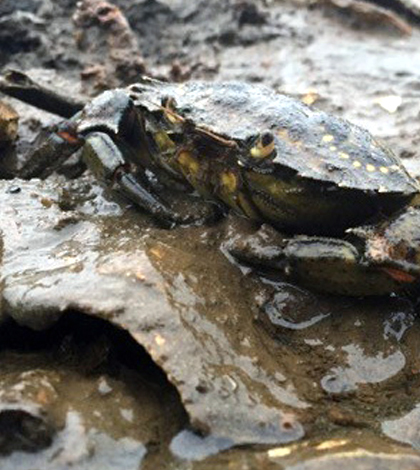 Citizen scientists volunteering with the Washington Sea Grant have found an invasive green crab on San Juan Island, according to a release from the University of Washington. The spotting marks the first time that the invasive species has been found in inland Washington waters.

The volunteers are part of Washington Sea Grant’s Crab Team, an early detection and monitoring program to look for European green crab and collect information on local marine life. They found a single, large, 3-inch adult male crab during a regular monitoring activity.

Their efforts help the sea grant but also the Washington Department of Fish and Wildlife, which is responsible for controlling aquatic invasives in the state. The agencies are coordinating a response to the sighting and working with scientists at the university’s Friday Harbor Laboratories.

Crab Team volunteers were trained and began monitoring sites in April to detect the invasive threat and monitor Puget Sound pocket estuaries that provide ideal crab habitat. The monitoring program focuses on early identification of infestations so that resource managers can take action to reduce impacts and prevent further spread.

Until now, green crab populations in Washington have been limited to Pacific coastal estuaries. But the 2012 discovery of invasive crabs in Canadian waters across the Strait of Juan de Fuca prompted the state’s wildlife department to invest in Salish Sea monitoring and early detection.

European green crab have been stowaways on ships bound for U.S. ports since the 1800s, establishing populations, eating local clams and other shellfish and causing serious impacts. In Maine, for example, softshell clam harvests declined dramatically when the crab became established and eelgrass beds were damaged by the invader’s digging habits.