Iron Hoarding and Recycling by Aquatic Plants in the Pacific 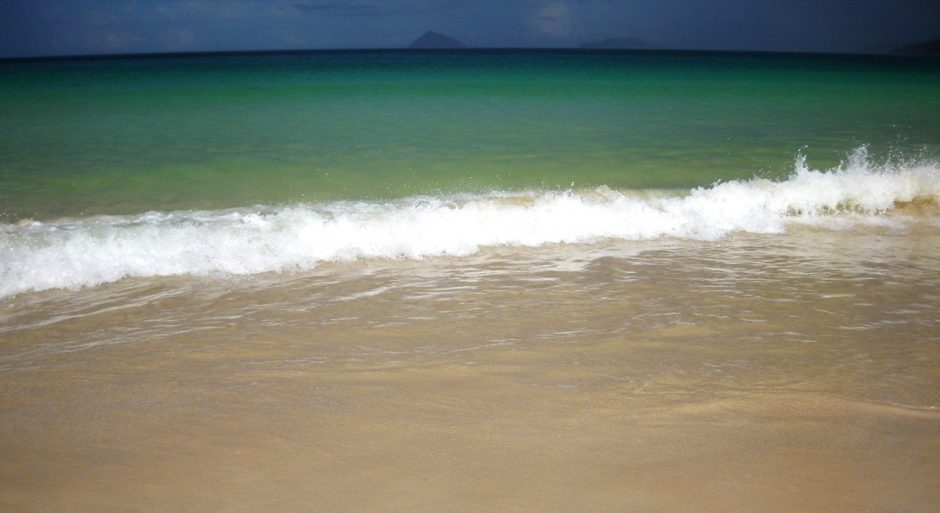 UCI oceanographers have discovered that phytoplankton communities in the eastern equatorial Pacific recycle and retain iron in their upper-ocean habitat. A key nutrient, the metal enables them to consume nitrogen, carbon dioxide and other elements to reproduce and grow. (Credit: PublicDomainPictures.net)

Iron is essential to fertilization in the marine environment, but it isn’t a constant present throughout the world’s oceans. Phytoplankton in the Atlantic Ocean have winds blowing across the Sahara Desert in their corner; this force carries iron-rich dust into the Atlantic and allows microscopic plant life plenty of fertilizing iron, which facilitates the consumption of nitrogen.

However, in the Pacific, it’s a different story. Upwelling, the force that brings deeper, colder water in the ocean nearer to the surface, is critical for plant life because it also brings higher concentrations of dissolved nutrients like phosphates and nitrates with it. However, without iron, the plants aren’t able to put that nitrogen to use, and in the eastern equatorial Pacific Ocean, iron is scarce.

New research from a team of scientists at the University of California, Irvine has revealed that the phytoplankton in the region have a coping mechanism: together, they hoard the iron in their upper-ocean habitat, and recycle it, stretching it further than previously known. This revelation is meaningful, not just for understanding how oceanic plant life survives, but for understanding how it pulls atmospheric carbon dioxide into the ocean, regulating the climate.

Oceanographers had readily observed that Pacific phytoplankton are productive despite the obvious nutrient imbalance that a low iron supply represents for some time. In fact, the question of how the minuscule plants managed to compensate for the lack of iron was something of a mystery. For UCI’s Patrick Rafter, an assistant project scientist and the lead author on the study, the puzzling problem inspired some of his work.

“Some scientific insights come from the stereotypical ‘A ha!’ moments, but this particular study sought to address some unanswered and mysterious results going back as far as my Ph.D. thesis,” explains Rafter. “As it is with a lot of scientific research, much of this new work began as a study of something completely different.”

Looking for answers that might explain how plants could consume nitrogen and grow despite being in iron-poor regions of the ocean, Rafter collected water samples hundreds of miles west of the Galapagos Islands. He also analyzed sediment cores dating back a million years.

“For my Ph.D. thesis work at Scripps Institution of Oceanography, I used sediments from the equatorial Pacific that were originally collected by the International Ocean Discovery Program (IODP),” details Rafter. “I measured the isotopic composition of nitrogen (a rare form of nitrogen) in a few sediment cores, which helped me to reconstruct the surface consumption of nitrate (a main form of nitrogen that is essential for plant growth).”

“My thinking was that if we knew the frequency of El Niño events before and after big changes in greenhouse gases during the ice ages, we should be able to make predictions about how they will change in the future,” Rafter describes. “Nitrate is completely consumed during modern El Niño events and I was using this relationship to understand past El Niño events. I found a very unusual pattern of changes in eastern equatorial Pacific surface nitrate consumption, suggesting that El Niño is insensitive to changes in CO2 (a rare source of good news with the current rising greenhouse gases).” Iron-limited regions of the ocean. (Credit: Moore et al. 2004, from the author)

“We know from studying the modern equatorial Pacific that we can stimulate more consumption of nitrate by adding iron to these waters, but the sediment-derived changes in past nitrate consumption were better explained by ocean physics (the strength of deep waters upwelling to the surface) and not the addition of iron, which should be much higher during ice age periods because there is more iron-rich dust in the air,” remarks Rafter. “I spent part of my Ph.D. thesis and most of my post-doctoral work at Princeton University, along with co-author and MacArthur fellow Daniel Sigman, seeking answers to this conundrum.”

The team used sites for analyzing modern seawater that are visited regularly as part of regular maintenance cruises by the National Oceanic and Atmospheric Administration (NOAA). NOAA has placed buoys spanning both the Atlantic and Pacific oceans; of most interest to the team were those from the region of the Galapagos Islands over to Papua New Guinea. The buoys alert scientists to ocean and atmosphere conditions related to El Niño and La Niña, and require routine maintenance, providing an opening for this research team (and others).

“Through connections I had made as a student at Scripps Institution of Oceanography, I was allowed to sail with them and get seawater while they were tending to the buoys,” states Rafter. “On later cruises they provided me water without having to be there to collect it myself, which was a huge help.”

The site west of the Galapagos was one of perhaps 1,000 sites the team used for measurements, but this site in particular was of special interest.

“[T]his site was great because it was in the middle of waters where the element iron (Fe) limits primary production (plant growth),” Rafter details. “If you add iron to these waters, it stimulates the uptake of nitrate and the growth of marine plants (phytoplankton) called diatoms that are important to the global cycling of carbon. When these marine plants die, some of them sink to deeper waters, taking their carbon with them. Storing this carbon in the deep sea keeps it from entering the atmosphere as the greenhouse gas carbon dioxide. We call this surface-to-deep-sea carbon transport that begins with nitrate consumption at the surface the ‘biological carbon pump’ or just the ‘biological pump.’”

Rafter analyzed the water samples back at Princeton University.

“I measured the nitrogen and oxygen isotopic composition of nitrate (NO3-) in these and other waters from around the Pacific Ocean, which can tell you about the geochemical history of nitrate,” Rafter describes. “This is because the different isotopes are influenced by different processes—if you know the language of these isotopes you can read the measurements like a book. I wrote a few papers examining where equatorial Pacific nitrate comes from, what affects the characteristics of equatorial Pacific nitrate, and more.” Once Rafter realized that the phytoplankton must be vigorously recycling iron to explain how they were also consuming nitrogen at the observed rates, they realized the significance of the study.

“One of the key insights from our study is that the internal cycling or ‘recycling’ of iron must be used by phytoplankton that also use the ‘new’ nutrient called nitrate,” Rafter emphasizes. “This rewrites one of the fundamental ‘rules’ that all oceanographers learn about marine phytoplankton, the carbon cycle, and the biological carbon pump.”

At this point, Rafter explains, the team built a “box model”—a numerical simulation—to calculate the total amount of iron required to explain the growth of all the phytoplankton at this site that wasn’t fueled by nitrate consumption alone.

“The ultimate goal was to calculate a necessary rate of iron recycling,” states Rafter. “We estimated a rate of iron recycling that was not too much faster than was previously measured, which was reassuring that the necessary rates were reasonable. New work with collaborators will try to observe this transfer of iron from dead to living phytoplankton, especially the large, nitrate-consuming diatoms. We then used these rates to link this iron recycling with observed seasonal and even ice age-timescale changes in nitrate consumption at this and other sites.”

Rafter asserts that while it is likely that there are other elements that phytoplankton preferentially recycle like this in certain upper ocean regions, such as cobalt and manganese, none appear to play the same limiting nutrient role that iron plays in driving the biological pump.

Rafter stresses that it is widely known that iron, an important nutrient for marine plant life, is recycled—in fact, all biologically-important elements are recycled to some degree. The team thinks that the entire ecosystem, not just the phytoplankton, must have evolved to retain this essential element when it limits productivity.

“Oceanographers typically separate marine plant growth into that using ‘recycled’ nutrients—recycled within the surface ocean—and that using ‘new’ nutrients, those delivered to the surface ocean,” Rafter explains. “This separation between recycled and new nutrients is important, because the plant growth fed by new nutrients is equivalent to the maximum amount of carbon that can be delivered to the deep sea. This last part is the real reason we all study plant growth in the ocean!”