Jason and the Argo network 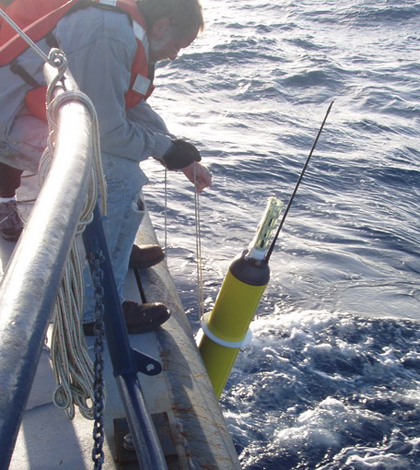 In Greek mythology, the hero Jason sailed the Argo in search of a golden fleece that would prove he was the rightful king of Lolcos, an ancient city. His crew members were called the argonauts.

Today, the Jason satellite looks down on the world’s oceans, overseeing the Argo network. His argonauts are data-broadcasting floats, and his search is not for a fleece but the effects of rising oceans.

NASA and the French space agency launched the first satellite in the Jason series in 1992. All three iterations of the satellite have had an altimeter – a range-finding instrument – to measure distance to the ocean’s surface.

The current satellite can measure ocean topography down to a few centimeters’ height. Combine that with a network of 3,600 monitoring floats and scientists can get a very accurate view of ocean change.

But the tale of how today’s extensive Argo monitoring network came about is a bit of an odyssey.

“Scientists have been using floats since the 1960s,” said Gregory Johnson, an oceanographer at the National Oceanic and Atmospheric Association’s Pacific Marine Environmental Laboratory. “The floats were sound sources and mooring stations were set up to listen to them. Then we decided to have the floats listen, triangulate their locations after the sounds bounced back and get data on currents.”

Johnson said it wasn’t long after those developments that the Scripps Institution of Oceanography decided to have its floats surface every 20 days or so and transmit their locations. Scientists began equipping floats with sensors and technological advances made a network possible – a grid of floats constantly monitoring all over the world, requiring international cooperation.

The first floats were deployed in 1999 by Australia and then the U.S., Johnson said. Their number had reached 3,000 by 2007. Many partnering countries help by giving access to their territorial waters. Some have even offered space on their ships for float deployments. Other contributing countries include China, India, Japan, and many in Europe. Independent researchers, usually from universities, have deployed floats and volunteered the data collected for inclusion in Argo’s publicly available database.

Johnson said the data have been used by climate scientists, military interests, fisheries and meteorologists. The data have also contributed to weather forecasts, search-and-rescue missions and responses to oil spills.

“We have gross, real-time checks for the data that is sort of like a reality check. Then every single profile is compared to historical data and other Argo profiles,” Johnson said. “Because the data are available in real time, they’re used operationally.”

Each float is about 3 degrees longitude or latitude from the next one and operates by drifting with the currents at a depth of 1,000 meters for 10 days, then sinking to 2,000 meters before rising to the surface while taking readings. Most floats have been equipped with sensors to monitor conductivity, temperature and depth.

“The newer floats are more efficient. Some are smaller,” Johnson said. “We are transferring to a new system using Iridium satellites. We used to transmit 100 points, but now we can transmit 1,000 points in 15 minutes.”

Johnson said the entire array, with each float monitoring on a 10-day cycle, needs only 60 watts of power, or about as much as a standard incandescent light bulb. Its efficiency is impressive, but so is the system’s role: providing information important to understanding global warming and how the oceans are changing.

“One piece of the puzzle is clouds and aerosols, and heat storage is also an important part,” Johnson said. “Argo is giving us hints to the global water cycle. And we might see an acceleration of the water cycle over time.”

Looking at data over time is a key advantage the network provides to researchers.

“With 130,000 profiles a year taken all over the ocean, it allows us to compare historical data, which are sparser,” Johnson said. “We’ve found that over the decades, salty water has actually become saltier while fresh water has become fresher. Sea water is warming and ice is melting, with sea levels rising about six centimeters over the last 20 years.”

Johnson said the world’s oceans play a larger role in climate circulation than many people realize.

NOAA, the Scripps Institution of Oceanography, University of Washington and the Woods Hole Oceanographic Institution work together to maintain the U.S. portion of the Argo network. As of December 2012, the worldwide network had collected more than one million data profiles and provided data for more than 1,250 research papers.