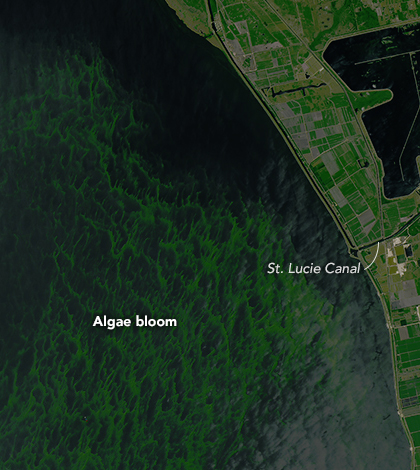 A combination of strong rainfall this year and increased releases from U.S. Army Corps of Engineers’ levees along Lake Okeechobee has contributed to a massive, putrid bloom of algae along Florida’s coastline, according to National Public Radio. The bloom in the lake began in early May and spread to an extent of 33 square miles. The releases, to protect the public from flooding, sent algae and nutrients downstream through the St. Lucie River and into the Atlantic Ocean.

The discharge comes out near Stuart, Fla., where residents have had to deal with horrific odors comprising scents put off by rotting, dead animals. And portions of the algal bloom stuck in shallow, nearshore waters have developed thick scum coverings or even something resembling fur. The blooms have stained boats, killed fish and chased away tourists.

Images from NASA’s Earth Observatory show blooms in Lake Okeechobee on July 2, 2016. They were acquired by the Operational Land Imager on the Landsat 8 satellite. The blue-green algae, or cyanobacteria, that make up the blooms are single-celled organisms that use photosynthesis to grow but can develop much faster in nutrient-rich conditions.

Lake Okeechobee gets a great deal of runoff from nearby sugarcane farms that make up one of the biggest sugar-producing regions in the nation. The runoff contains loads of phosphorus and nitrogen that feed the blooms.

Water samples collected from the lake and from the river near Stuart tested positive for high levels of toxins produced by the algae. The algae and their toxins can disrupt ecosystems. They also pose concerns for human health, as ingesting algae-tainted water can cause nausea, vomiting and liver failure in extreme cases.

The conditions causing the blooms unfortunately don’t appear to be letting up. The U.S. Army Corps of Engineers, dealing with high rains, says their efforts to avoid flooding have pumped enough to cover Delaware with 2 inches of water.