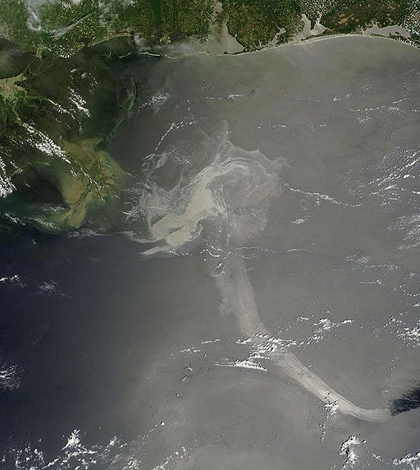 The Environmental Monitor didn’t even have a website when the Deepwater Horizon oil rig exploded five years ago this week, killing 11 workers and leaving behind a gushing well that led to the largest-ever oil spill in U.S. waters.

Not than anyone missed out from our lack of reporting on the event. The 24-hour news networks responded with wall-to-wall coverage, filling screen corners with live feeds of the seabed gusher or counters that ticked off the days, hours, minutes and seconds that the leak went unplugged.

But the effects of the spill have lasted well beyond the life of the news cycle. Oyster populations declined in Louisiana after the spill, and though Reuters reports the cause is unclear, the oysters haven’t recovered. Bottlenose dolphins in the northern Gulf of Mexico are dying at a higher rate since the spill. Oil still rests on the ocean floor and tar balls are still washing up in marshes.

The lingering effects have given us plenty of opportunities to probe the research on the Gulf, its habitats and inhabitants. After looking back in the archives, I was surprised to see that we’ve covered issues related to the spill as often as we have. Here are a few of the highlights after Deepwater Horizon. The Jag Ski at work on the Dog River. (Courtesy Bret Webb)

Bret Webb, an assistant professor of civil engineering at University of South Alabama, was already planning to outfit a 2008 Kawasaki Ultra Lx with monitoring equipment to map shallow areas of Mobile Bay. Then the oil spill happened, and he added a Turner Designs fluorometer and YSI Portable SeaKeeper to the list of equipment, which already included an acoustic Doppler current profiler. He named the rig after the school’s mascot, the Jaguar.

The Jag Ski’s first mission came when BP recommended filling a breach in a barrier island at the mouth of Mobile Bay to prevent oil from flowing through. Hurricane Katrina cut the breach, the likes of which usually fill in naturally. A Jag Ski survey of the breach found that irregular depth,  recirculating water and too little sand kept the breach from closing on its own. The tracks of 300 GPS-equipped drifters shown in the Gulf of Mexico. (Courtesy Tamay Özgökmen/CARTHE)

This project was so big we covered it twice. In summer 2012, Daniel Kelly reported that scientists with the Consortium for Advanced Research on Transport of Hydrocarbon in the Environment released more than 300 custom GPS drifters into the Gulf of Mexico. This was the largest experiment of its kind. According to Tamay Özgökmen, director of CARTHE director and a professor at the University of Miami, that was the “cheapest, most ecological way” to gather the data his modeling group needed to create a forecasting system for how the Gulf’s complex currents would move contaminants around in the event of another spill.

In 2014, Alex Card followed up with Özgökmen, who said that among the revelations provided by the drifter data was that “flows that are in between hundreds of meters to tens of kilometers are very, very influential in the initial spreading of pollutants.” He also said that the drifters proved their real-time response usefulness when 28 drifters were deployed around another rig fire after the initial reserach. A 1,000-drifter experiment is planned for 2016. The Deepwater Horizon oil spill was a problem the Gulf’s coastal wetlands, which already faced a critical threat: They’re sinking. The causes include rising sea levels and a lack of nourishing sediment from the Mississippi River, which has been cut off by dams and other feats of engineering along the river. Scientists say opening the gates on some of that infrastructure and letting more Mississippi River freshwater flow through the cypress wetlands could help, and that’s basically what happened following the spill. The diversions in Louisiana were operating at full capacity to pass more water in hopes the additional flow would push oil near the coast further out to sea.

Beth Middleton, a wetland scientist and research ecologist with the U.S. Geological Survey, called this “accidental experiment” a rare opportunity to study the effects of increased flows on coastal wetlands. She led a study that found bald cypress trees thriving in a forested wetland that received extra flows after the spill. That’s good for sinking wetlands, but trees that produce more leaf litter can help build up the land and slow the effects of sinking.

Top image: A satellite image of the Deepwater Horizon oil spill in the Gulf of Mexico (Credit: NASA)