Marine Food Webs At Risk Thanks to Climate Change 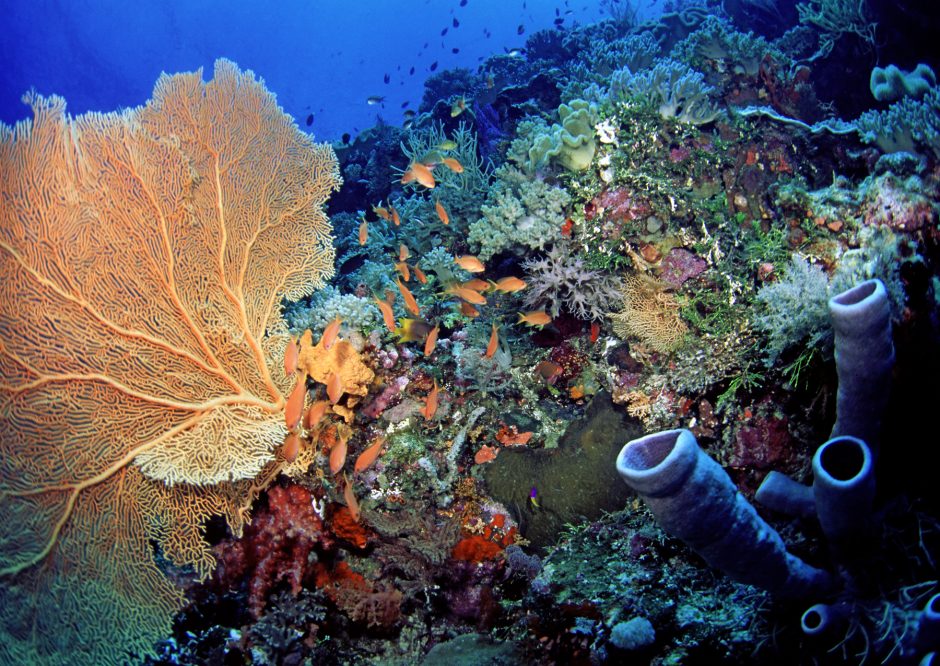 Both the concept of the food web and the ecosystem are founded on the idea that all species inhabiting a region rely upon each other for survival. Every individual species lives an intimately interconnected existence. An insult to one species typically affects at least those species that rely upon it—and sometimes affects many, many other species in an attenuated ripple outward.

Food webs in particular are masses of connected food chains. Each chain represents the direct transfer of energy from one species to another. The tiny autotrophs that harvest energy from things like carbon dioxide and minerals require sunlight energy to function, and these species make up the foundation of the food web. The free transfer of energy between species maintains the ecosystem, allowing it to thrive.

Using mesocosms to predict the effects of climate change

Although various climate change forecasts discuss the many negative effects things like higher temperatures and acidification are likely to have on marine ecosystems, it has been very difficult to provide detailed data on how complex food webs and ecosystems will respond to changing conditions. To begin to remedy this issue, the researchers needed to resolve holes that were present in the data.

“Most marine experiments on climate change were either done on single stressors or single species,” Dr. Ivan Nagelkerken, a University of Adelaide professor of marine ecology who works in tropical and temperate coastal ecosystems with a special focus on fishes, and the project leader of the food web research, describes. “Nature is much more complex, and hence we need more sophisticated experiments with entire species communities to better understand the effects of climate change on our oceans and its biodiversity.”

The solution they chose was to create advanced mesocosms in the lab. The team selected species that represented a local rocky shore reef system with kelps to include in the various mesocosms.

“We used ~1,800 liter tanks that were maintained for six months under future climate conditions,” details Dr. Nagelkerken. “We seeded the tanks with live fish, shrimp, and snails, and also with rocks and sand collected from the sea, including all the different species attached to them. The flow-through seawater in the tanks was unfiltered, allowing larvae of marine species to enter the tanks. Overall, this lead to a high diversity of species inside the tanks.”

Many of the species inside the tank were short-lived, such as zooplankton, phytoplankton, Cyanobacteria, snails, meiofauna, and amphipods. These species either spent their entire life cycle inside the tanks, or reproduced across several generations, allowing the team to capture the potential for intra- and intergenerational adaptation. The team has yet to accomplish this for longer-lived species such as fish, however. The results of the research indicate that climate change conditions produce both warming and acidification in these ecosystems. These two forces together create stress on the system, which has the overall effect of reducing energy flows upward from the first trophic level. This foundational level consists of primary producers (autotrophs) and detritus, which is made up of dead particulate organic material such as ground up bodies of dead organisms and fecal material. Communities of microorganisms typically colonize detritus in the ocean, decomposing the detritus and making that energy available again to intermediate herbivore species and ultimate upper level carnivores.

However, warming in isolation also reduced the transfer of energy from herbivores to carnivores, and rendered the transfer of energy from primary producers and detritus to detritivores and herbivores less efficient. The team found that acidification and warming together expanded cyanobacteria production and therefore boosted the biomass of primary producers, this led to the production of more detritus rather than to higher level biomass; in other words, it restricted more usable energy to the base of the food web.

On the other hand, ocean acidification considered in isolation enhanced the from of energy from primary producers and detritus to herbivores and increasing carnivore biomass, positively affecting the food web. However, warming and acidification together produced a shift towards a more detritus-based system and reduced energy flow to the higher trophic levels—in short, a more simplified marine food web with different producer–consumer dynamics.

“Ocean warming overrides the positive effects of ocean acidification on some parts of the food web,” Dr. Nagelkerken explains. “So the two combined lead to increased detritus production. This is not necessarily bad, but if this detritus then fails to re-enter the food web it is weakened; in our experiment there was indeed reduced detritus recycling.”

There is little chance of either warming or acidification happening in isolation as climate change continues, so these results have critical implications for the structure of the benthic communities of the future.

“Simpler food webs and alteration to critical consumer-producer interactions can weaken the resilience of food webs and reduce biodiversity,” cautions Dr. Nagelkerken. “Diversity is an important driver of ecosystem resilience and productivity.”

In addition, this research highlights the need for more studies of locally specific ecosystems, since how any food web responds to warming and ocean acidification is likely to depend on the consumer–resource interactions and localized community composition of the specific ecosystem.

“It is likely that there are overall trends, but there can also be differences depending on the ecosystem and local environmental conditions,” Dr. Nagelkerken adds. “We will need to test these systems and other species to know for sure.”

Furthermore, even if increased ocean acidification alone can have some positive effects, acidification of the ocean would not leave marine ecosystems changed but unharmed.

“Our work at volcanic vents showed that only weedy species benefited from acidification and their population expansion reduced abundances of other less common species leading to a reduction in biodiversity,” comments Dr. Nagelkerken.

“Climate change is affecting so many people around the world because they depend directly or indirectly on ocean resources for food, income, recreation, spiritual reasons, or coastline protection,” explains Dr. Nagelkerken. “As climate change is altering these ecosystem services, often in a negative way, we need to be able to accurately forecast these impacts to support climate adaptation policy and measures.” This close-up image shows a diverse group of parrotfishes, surgeonfishes and unicornfishes congregating and grazing on the shallow reef flat inside a marine reserve in Fiji. (Credit: Cody Clements)