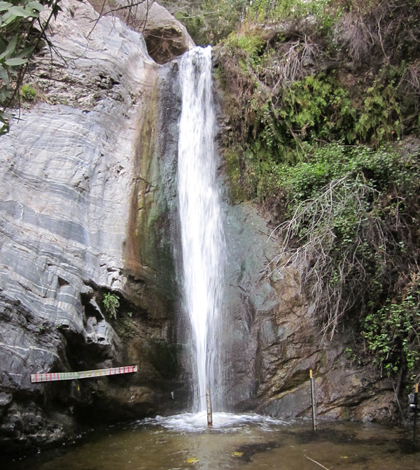 For scientists who study the way landscapes evolve as rivers carve through rock, a plunge pool at the foot of a waterfall in the middle of a storm is a natural place to collect data.

But it’s not a great place to go wading with a yardstick.

“It’s hard to be in these waterfalls, and you definitely don’t want to be in the plunge pool during the full force of a storm,” says Joel Scheingross, a graduate student of geological and planetary science at the California Institute of Technology.

Scheingross studies sediment movement through waterfalls and plunge pools. It’s an important part of landscape evolution because waterfalls are in an extremely gradual state of retreat, slowly moving upstream as their bedrock is eroded by rushing water. However, plunge pools under waterfalls often hold a layer of sediment that protects the bedrock and prevents erosion.

“But if you can move all the sediment through, then you have bedrock exposed at the base of the plunge pool and you can start eroding that bedrock,” Scheingross said.

Storms can cause the high flows necessary to wash the sediment out of a pool and expose the bedrock to erosion, but it’s also a dangerous time to manually measure sediment in the pool. And just measuring sediment before and after a storm leaves out an important part of the puzzle.

“When you have a big storm and you have a lot of water coming through the waterfall, you’ll move out a lot of sediment,” Scheingross said. “But as the storm starts to die and the flow level goes down, the river will start depositing a lot of fine sand in the pool again.” Scheingross at work in his plunge pool in the San Dimas Experimental Forest.

The trick is to measure the depth of the pool in the midst of a storm when the old sediment has been washed out but new sediment hasn’t yet settled. That’s when the bedrock is most likely to be exposed and vulnerable to erosion.

To do that, Scheingross will install a series of Airmar Sonar depth sensors directly below and in a line downstream from a 10-meter waterfall in the San Dimas Experimental Forest, a 35-minute drive from downtown Los Angeles. The sensors will be connected to a NexSens data logger that will record depth measurements every 15 minutes, tracking sediment as it moves through the system.

Scheingross will combine the field measurements with his work in the lab where he measures erosion experimentally with a scaled-down “river in a box.” The goal is to learn more generally about the processes that are going on and come up with equations that could be applied to other systems.

A better knowledge of waterfall erosion is important for understanding erosion in a stream network in general, and Scheingross’s work could have practical applications anywhere that sediment affects management decisions. For example, it could help dam managers better estimate how quickly sediment will build up behind a dam and require dredging.