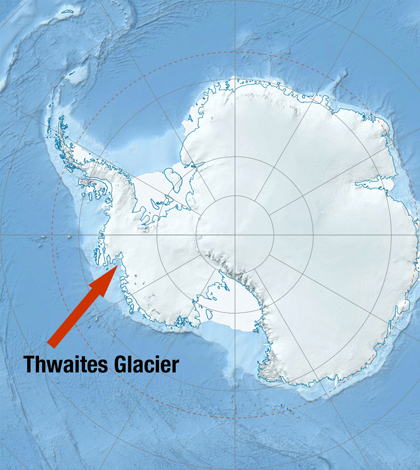 A study from the University of McGill has determined that the Thwaites Glacier, of the Antarctic Ice Sheet, may be the primary contributor to several millimeters of sea level rise over the next couple of centuries.

According to the study, published in the journal Nature, the Thwaites Glacier is “deep rooted” with nearly a kilometer of ice below the surface of the sea. This is due to gravity and steady snowfall atop the ice. But due to the fact that the glacier is a runaway from the larger ice sheet known as the Amundsen Sea Embayment and isn’t grounded like that ice sheet, it is subjected to much more rapid melting.

It’s believed the glacier will melt from below and break quickly toward the top. With a scaled model of the glacier and recent projections for wind circulation in the area, the researchers were able to determine that, as the Thwaites melts, up to 50 millimeters of sea level rise can be expected by 2100 and 150 millimeters of rise by 2200.