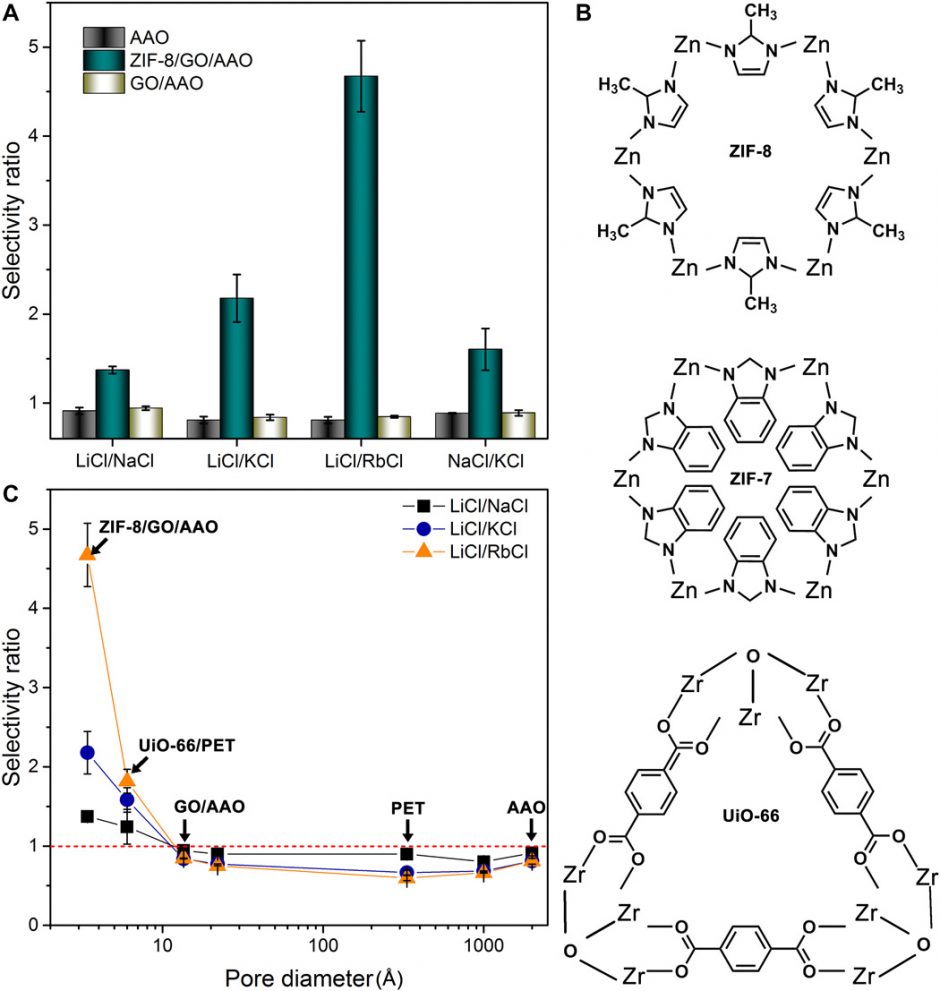 When are crystals like sponges? When they’re metal-organic frameworks (MOFs), the materials that formed the basis of new research from Monash University, CSIRO, and the University of Texas at Austin.

MOFs are crystals that act like sponges due to their vast internal surface area—the largest of any known substance. They are therefore ideal for capturing, storing, and removing or releasing compounds such as ions and salt rendering sea water undrinkable. Professor Huanting Wang of the Monash University Faculty of Engineering in Melbourne, Australia, spoke with EM about the breakthrough research.

The team in this case discovered that MOF membranes can act like the cell membranes of organic structures, taking on an ion-selective filtering function. The researchers are now working to develop these membranes further, so they can both separate ions and remove salts when applied with seawater, all for a low cost.

Reverse osmosis (RO) membranes are the current gold standard for desalination, and they are also critical for most water treatment protocols. However, RO membranes leave something to be desired in the realm of energy consumption. Furthermore, as they operate on neither the principle of selective ion transport in biological channels nor dehydration of ions, they present with significant limitations for both desalination and industrial applications.

An additional wrinkle here is the world’s growing demand for rare metals like lithium. Now that lithium-ion batteries are in high demand, sourcing lithium in new ways is a real point of interest in industry—and since lithium ions are a byproduct of wastewater and salt water treatment systems, it makes sense to look to these processes as sources of the rare metal, if extraction can be made practical.

“We have found that these membranes can separate Li ions from other metal ions, and have the potential to extract Li from complex liquid systems,” remarks Professor Wang.

The MOFs make water desalination less costly and far less energy intensive, and they also make the possibility of extracting lithium as part of the newly sustainable process a very real prospect. But how far in the future will it be before MOFs can be deployed for commercial and industrial use?

“We are working to scale up the membrane fabrication, and then test the membrane under industry-relevant conditions,” responds Professor Wang. “It could take 3-5 years to demonstrate their application in the industry.”

In any case, when it comes to wastewater and mining waste treatment, “It [this new technology] has the potential to be part of the standard,” comments Professor Wang.

Also on the horizon for the researchers: new approaches to the scaling problem.

“At the moment, we are mainly focused on depositing MOFs on porous substrates to fabricate supported MOF membranes, which has the potential for scaling up,” adds Professor Wang.

MD simulations of ion transport in ZIF-8.
(A) The simulation cartoon shows the ZIF-8 cavities filled with water molecules (green spheres), and they are connected via narrow windows. For clarity, ZIF-8 is shown as a wireframe. The apparent empty spaces are actually occupied by atoms of ZIF-8. K+ and Cl− ions are represented by orange and purple spheres, respectively. (B) The normalized mobility of K+, Li+, and Cl− ions in ZIF-8 and in water. The mobility of Cl− in 1 M aqueous solution is taken as the reference. The Li+ mobility is enhanced in ZIF-8 compared with that in water, whereas the opposite trend is observed for K+. Consequently, Li+ in ZIF-8 has a higher mobility than K+, which is consistent with experiments. (C) Radial distribution function of water molecules around Li+ and K+ in bulk solutions and in ZIF-8. Owing to the confinement effect, the water density in the first hydration shell of Li+ is significantly reduced, and the second hydration shell nearly disappears. Similar (but less) trends can be observed for K+. The diameter of the partly hydrated Li+ appears to be smaller than that of the partly hydrated K+ in ZIF-8, which might explain its higher mobility. (Credit: Wang, et al.)