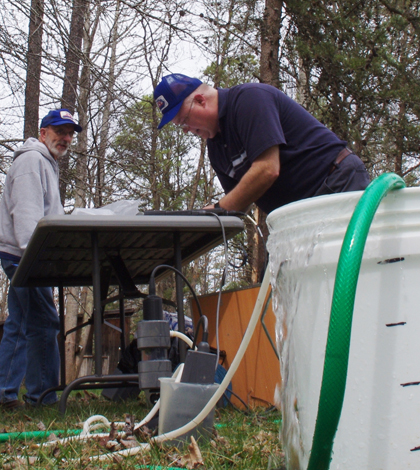 Researchers sample 51 water wells in eastern Kentucky. (Courtesy of the University of Kentucky)

Because of the potential for increased oil and gas exploration in Eastern Kentucky, scientists with the Kentucky Geological Survey have recently wrapped up a groundwater sampling effort considering 51 water wells, according to a release from the University of Kentucky. The study focused on wells in the Berea and Rogersville oil and gas plays.

All of the field work for the effort took place in Boyd, Carter, Elliot, Greenup, Johnson and Lawrence Counties. Samples of water were collected, as well as information on water-well construction and the conditions of surrounding areas.

Lab analysis of all samples has been completed, with researchers considering metals, dissolved gases and ions contributing to salinity. Data interpretation is underway at this point, with preliminary results indicating that methane may be a fairly common constituent of groundwater in Eastern Kentucky. Of the 51 wells sampled, researchers have found 41 had detectable methane concentrations. Twenty-six of the wells had concentrations above 1 milligram per liter.

GSI Environmental, Inc., of Austin, Texas, helped in the work. Funding was provided by the U.S. Department of Energy.