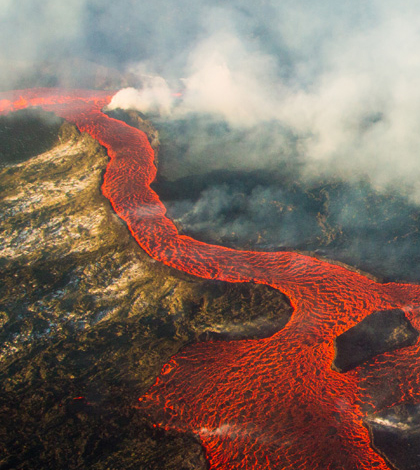 January 2015 photo of an active lava flow from 2014-2015 eruption at Holuhraun in Iceland. (Credit: Anja Schmidt / University of Leeds)

Researchers from Europe and the United States have modeled the effects of some of Earth’s ancient volcanic eruptions, according to a release from the University of California, Berkeley. The eruptions of the time, dating back more than 300 million years ago, were very severe, sometimes lasting for years or decades.

Of chief interest in the modeling work were the gas and aerosol particles emitted from such super volcanic eruptions. The scientists, most of whom are operating out of European universities, were particularly curious about the impacts that years of sulfur dioxide emissions from flowing lava had on earlier Earth.

Their simulations suggest that the changes brought by the emissions during and after the large eruptions were probably not all that extreme. In fact, the scientists found that the lava flows would have to have continued for hundreds of years, not just decades, to bring about climatic interruptions severe enough to affect plant and animal life.

Full results of their modeling and analysis are published in the journal Nature Geoscience.