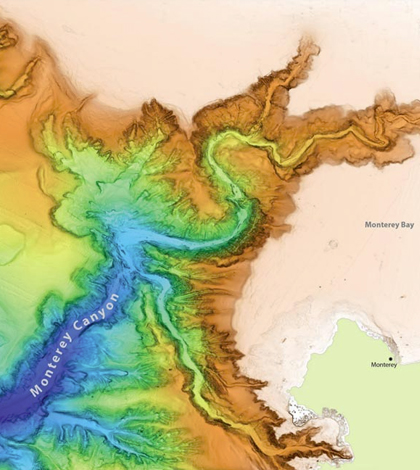 Hidden off the central California coast is a gorge carved into the seafloor that rivals the Grand Canyon, its steep walls measuring nearly one mile from top to bottom. The Monterey Canyon is one of thousands of giant underwater canyons that crisscross the ocean floor.

Since the discovery of these features at the turn of the 19th century, scientists have hypothesized that turbidity currents – avalanche-like flows of rock, sand and silt suspended in water that can traverse hundreds of miles – eroded away the canyons and cut sinuous channels along the ocean floor.

Supporting this hypothesis with direct measurement, however, has proven exceedingly difficult. Even the most robust monitoring equipment can’t survive currents strong enough to sculpt canyons in the seafloor.

A computer modeling effort from Stanford researchers, published in the Journal of Geophysical Research, could fill in the gaps in describing these powerful currents that, when they’re not creating some of the largest canyons on the planet, pose a significant risk to undersea telecommunications structures and oil rigs.