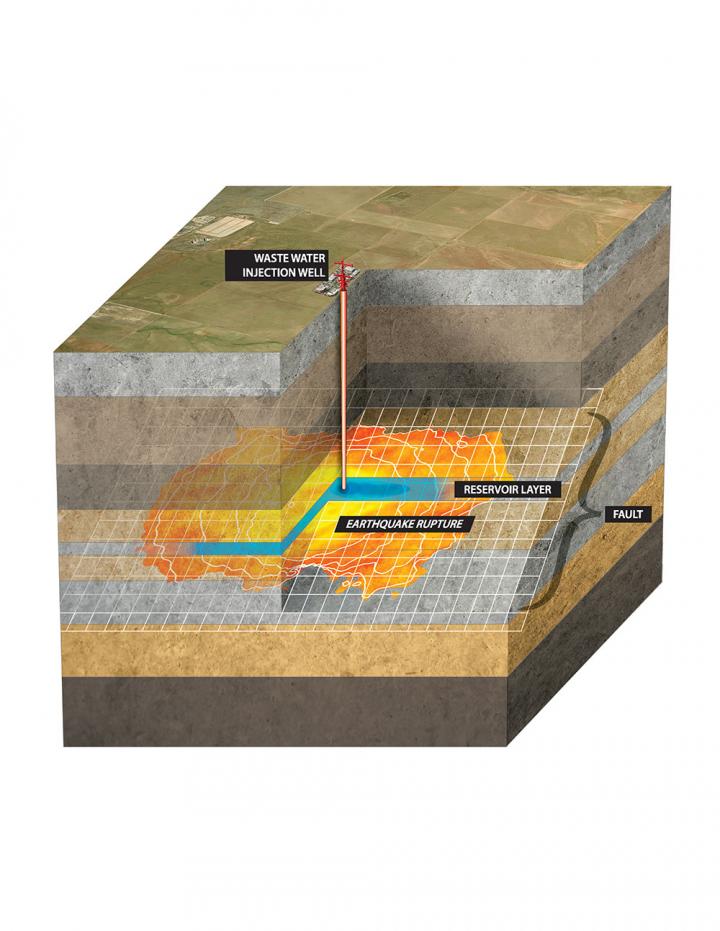 Earthquakes may appear to be squarely within the realm of the natural, but humans are now inducing earthquakes. Between 1973 and 2008, 21 earthquakes with magnitudes of three or more happened on average every year in the eastern and central United States. However, in 2014 that number jumped to more than 600, and in 2015 there were more than 1,000.

Wastewater disposal is the primary cause of this recent uptick in seismic activity, with most disposed wastewater produced during the extraction of oil and gas. Leftover hydraulic fracturing fluid comprises a smaller component of the total. While the actual hydraulic fracturing, or “fracking” process, which involves the injection of fluid into beds of shale deep underground, can trigger seismic activity, according to the United States Geological Survey (USGS), it is the subsequent disposal of wastewater that most commonly triggers such activity.

New research presented by Caltech seismologist Jean Paul Ampuero includes a model that determines the magnitudes of earthquakes that wastewater injection could trigger.

“Induced seismicity is a hot topic in seismology in recent years,” Ampuero explains. “Because of man-made earthquakes, there are now more earthquakes per year in the central US than in California. Industry and communities are naturally worried about the hazard caused by these quakes, especially by the question of whether or not a big one can be triggered by human activities. Researchers and operators are trying to figure out how to keep induced seismicity under control.”

This work has the potential to offer insight into not only induced earthquakes, but also natural seismic activity.

“My motivation to work on this topic grew up enormously when I realized two things,” Ampuero details. “First, induced seismicity is slowing the development of an important source of renewable energy: enhanced geothermal systems, which require fracturing deep rocks by fluid injection. Second, for those researchers who (like me) have been traditionally focused on the physics of natural earthquakes, induced earthquakes can be treated like an almost-controlled, large-scale experiment. For earthquakes known to be induced by a specific human activity, we can hope to find out how the earthquake started and why it stopped, and thus understand something about earthquakes in general. Earthquake physicists cannot otherwise experiment with the Earth like laboratory physicists do with other phenomena.” This is not the first attempt to describe the way that wastewater injection might trigger seismic activity. However, previous discussions of the problem suggested that any induced activity would be proportional to the volume of the injected fluid. This new research found that this overlooks an important factor: earthquakes can stretch past the region affected by fluid pressure.

“The specific approach we took in this study fills a gap,” comments Ampuero. “We felt that the results of more than 30 years of research in the field of earthquake dynamics had not been properly incorporated in our thinking about induced earthquakes. So, we extended our previous work on fracture dynamics to the context of injection-induced seismicity.”

The team combined dynamic earthquake ruptures simulated by computers and theory to produce a model that revealed that injection-induced earthquake size depends on both the energy stored by nearby faults, as well as the volume of fluid injected. Therefore, the model predicts the maximum possible magnitude of induced seismic events by quantifying the distance that earthquakes can move past any given injection site. In other words, while the model doesn’t offer a specific prediction, it provides the high limits of possible magnitude.

This new model also provides scientists with a framework for approaching natural earthquakes, offering added insight into their causes, and possible prevention. Both natural and induced seismicity can originate in small regions of the earth’s crust that are packed with concentrated energy; their ultimate size and impact is partially dependent upon how much energy is stored in surrounding regions.

“Natural earthquakes often start in areas of high stress left at the edge of the rupture of a previous earthquake, or at the edge of a ‘creeping section’ of the fault that slips steadily and silently,” Ampuero elucidates. “These earthquakes then grow but, if they do not find enough energy stored in the rest of the fault, they do not break the whole fault. This is our interpretation of what happened, for example, in the 2015 Gorkha, Nepal earthquake (magnitude 7.8): it only broke a deep portion of the Main Himalayan Thrust fault. The damage would have been even worse in Kathmandu had the rupture reached all the way up to the surface. This situation is common to our models of induced and natural earthquakes. Understanding better how earthquakes start and stop can help us understand when a fault is ready to generate its largest possible earthquake.”

This kind of insight will be critical to preventing future disasters, whether natural or human-made.

“What may sound surprising is the fact that earthquakes can be triggered by relatively small stress changes of a few kPa—very small compared to the typical few MPa stress drops during earthquakes,” Ampuero clarifies. “There is a notion, rooted on crustal stress measurements and other geophysical observations, that the Earth’s crust is ‘critically stressed,’ on the verge of failure everywhere, implying that small perturbations can lead to large effects. A challenge is to probe how close a certain region is to its ‘critical point’ without inducing a large earthquake in the process.”

In the meantime, the previous literature as well as this research places the blame for induced earthquakes squarely upon wastewater disposal, not fracking. Does all of this mean that fracking itself is safe from a seismic standpoint? Not exactly.

“While the fracking itself has not induced sensible earthquakes in the US (it has in Canada), its wastewater disposal does,” Ampuero explains. “It is impractical to clean this wastewater, that’s why it is disposed of by injecting it back into deeper Earth layers. It is thus ‘collateral damage’ arising from fracking.”

The research also points toward what comes next: a more meaningful solution for wastewater disposal than simply injecting it back into the Earth.

research,” adds Ampuero. “We have just scratched the surface of the problem, and we are now extending our work to relax some strong assumptions that were necessary to make initial progress.”