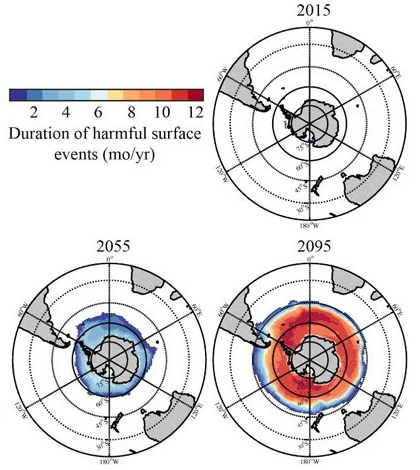 Researchers at the University of Hawaii and University of Alaska have found that increasing atmospheric carbon dioxide concentrations are likely to drastically change the chemistry of the Southern Ocean, according to a release. The changes will be so quick, they say, that some organisms living there won’t have time to adapt.

The scientists made the predictions using a series of Earth system models that let them explore how acidifying waters could affect the Southern Ocean within the next century. In particular, they zeroed in on carbonate ions in the ocean. If levels of these fall too low, then organisms like pteropods, tiny sea snails, won’t likely have enough time to adjust.

Researchers say that their analysis shows that low-carbonate-ion events are likely to occur more abruptly in the Southern Ocean, lasting anywhere from a month to six months in a 20-year period following their arrival. By the end of the century, scientists say the events could stretch up to a year in duration.