How Monarch Butterflies Know Which Way To Migrate 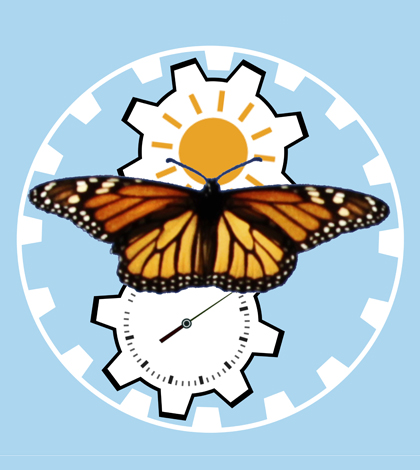 Researchers modeled how the monarch brain integrates the time of day with the sun's position in the sky. (Credit: Eli Shlizerman)

Ever wonder how monarch butterflies always know the right direction (southwest) to migrate? Well, science has answered that question: The butterflies combine the sun’s position on the horizon with the time of day to choose the correct path. But despite that knowledge, researchers have long wondered how the two pieces of information are combined in the butterflies’ brains.

Scientists at the University of Washington have finally answered this question, in a work that saw them modeling the interactions going on in the minds of flying butterflies. The model incorporated knowledge of the workings of the butterflies’ internal clocks, which humans also have, based on the rhythmic expressions of certain genes.

By putting all that information together, researchers found that two neural mechanisms come together to control signals from genes in the butterflies’ antennae that together tell them which way to fly. The model also uncovered a “separation point” that appears to be a limit to the flight pattern — monarch butterflies won’t cross the point when making course corrections.

More work remains to see if the model is consistent with the function of monarch brains. Early considerations point to yes.

Top image: Researchers modeled how the monarch brain integrates the time of day with the sun’s position in the sky. (Credit: Eli Shlizerman)