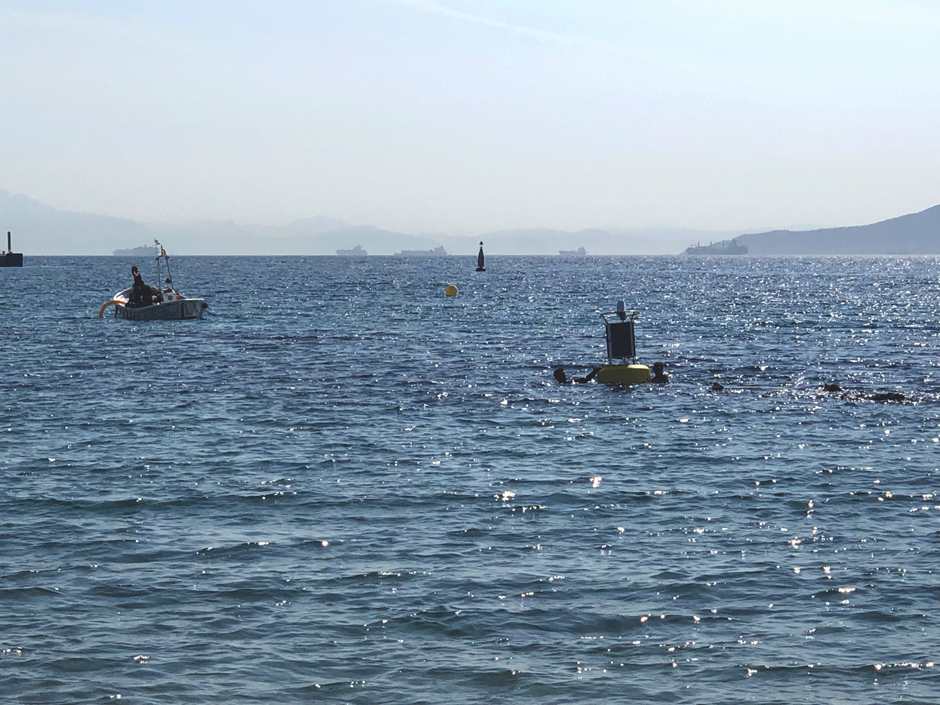 The buoy and underwater cameras are positioned for monitoring of the shipwreck site (Credit: University of Cádiz)

For as long as humans have inhabited Europe’s Atlantic coast, the ocean has been a great source of wonder and mystery. History is full of fascinating tales of epic endeavors, new discoveries of fearless explorers, fishing communities inextricably linked to the bounties of the sea, cultural interactions both peaceful and not, and voyages that went awry during monumental storms or simply due to bad luck.

In the south of Spain, at the boundary between the Atlantic Ocean and the Mediterranean Sea, one such tale involves a long-lost merchant ship that went undiscovered from the 16th century until 1984. Believed to be carrying valuable goods from Italy, it sank just across from Gibraltar in the Algeciras Bay at a point called La Ballenera.

“The Ballenera wreck is probably a merchant ship with a homogeneous cargo of Ligurian origin, with the characteristic ceramic productions from the area around Montelupo, Pisa and Florence, as well as other raw material products,” says marine researcher Pablo López Osorio from the nearby University of Cádiz.

The University is shedding light on this piece of history and other similar underwater artifacts in a unique way – by using monitoring buoys equipped with sensors and subsea cameras to document the nautical archaeology project and share it with the public. 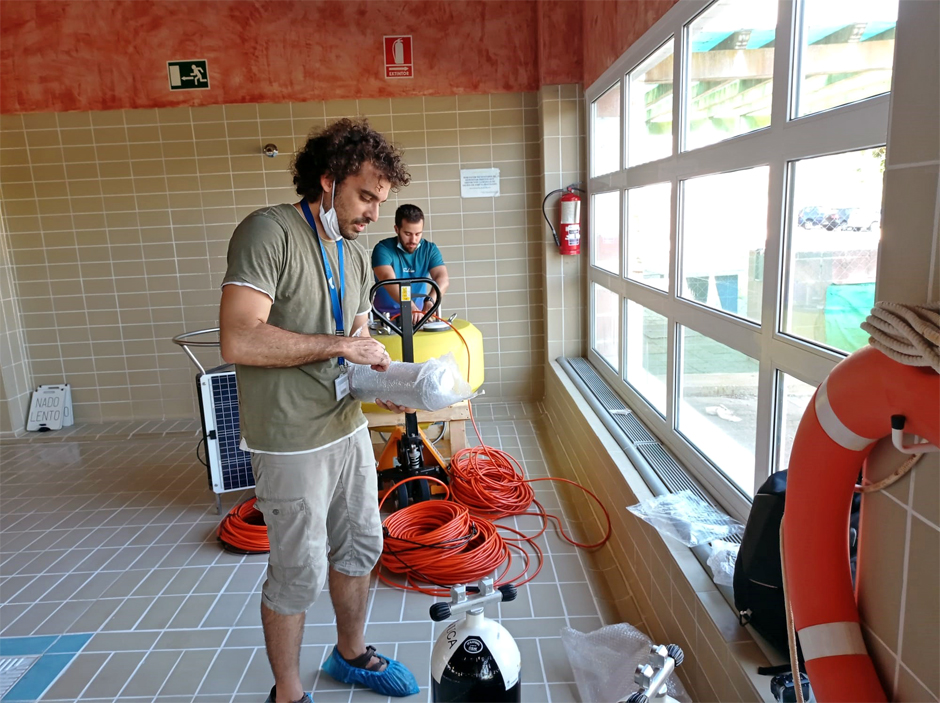 The efforts of the University of Cádiz are part of a larger multinational initiative to boost marine tourism and preserve cultural heritage. Commonly known as TIDE, the official project name is the Atlantic Network for Developing Historical Maritime Tourism. The project “focuses on the sustainable development of onshore and underwater sites of historical interest on the Atlantic Area coastline.” Long-lasting and environmentally ethical development is achieved by assisting organizations with research projects and the development of ecotourism products and experiences. These can be related to anything from trade and emigration to forts, battles and invasions. Diving and shipwrecks, of course, fit right in with this objective. A particular emphasis is placed on certain historical periods such as the Napoleonic era, Spanish Armada, World Wars, and Atlantic Migrations.

For its part as one of the founding members of TIDE, the University of Cádiz has focused on nautical archaeology at sites like the Ballenera shipwreck. While not a tourist attraction open to the general public, diving trips are organized while the archaeologists are working so that people can better understand the methodology of archaeology and the importance of the discovery. In addition, the University has established a graduate-level program for Nautical and Underwater Archaeology. This UNESCO-recognized program was the first of its kind to be offered in Spanish at its inception in 2016. The program focuses specifically on the research and preservation of underwater cultural heritage.

The initial survey of the Ballenera wreck in 1984 extracted a small amount of ceramic materials. The recovered items were subsequently restored at the end of the 1990s and published in a small exhibition. The University of Cádiz became involved later on to continue the exploration. According to López, a wide variety of goods have been recovered since. Some of the items found are:

Besides the physical goods, information obtained by studying the shipwreck is helping to uncover deeper cultural contexts from the 16th century. “Our campaigns arise from several questions that are still unanswered and are of great interest,” says López. Some points of interest include accurately pinpointing the chronology of the wreck, determining the cultural affiliation of the vessel itself (not just the cargo), and analyzing the materials to paint a picture of daily life on a Mediterranean merchant ship of the late 16th century. Nautical archaeology is a growing field of study. Its importance to global history is palpable; incorporating a monitoring buoy into this research allows researchers to understand the ecological conditions of research sites. 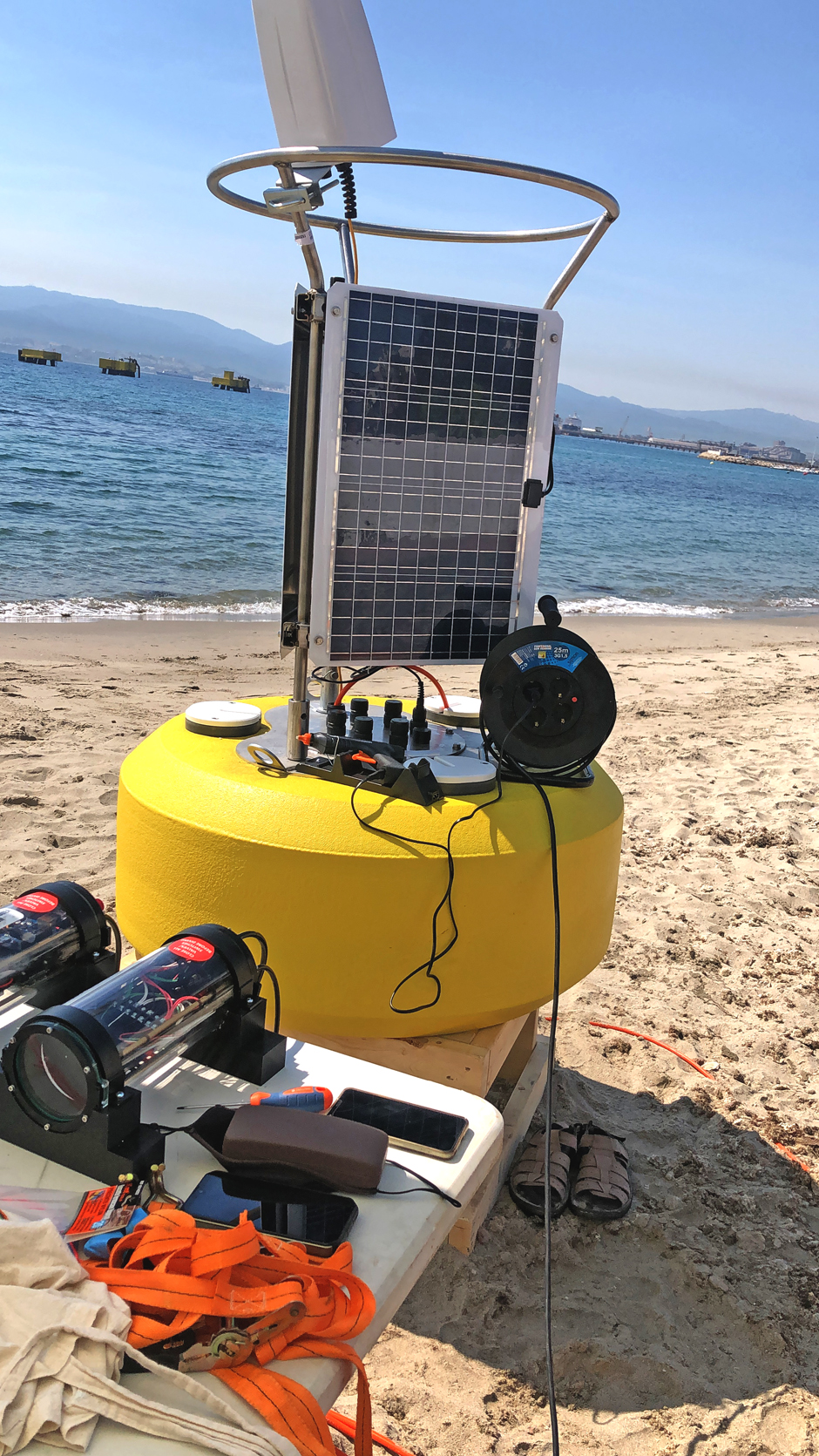 The monitoring buoy is staged for final testing on the beach (Credit: University of Cádiz)

How A Monitoring Buoy Makes a Difference

Documentation and dissemination are not as straightforward for nautical archaeology compared to onshore excavations. A core component to aid with this aspect of the project is a floating monitoring buoy platform equipped with an array of high-tech instruments.

The platform itself is a NexSens model CB-650 data buoy supplied by OceanNet S.L. It supports a topside weather station to determine the precise location and meteorological conditions at the site and a multiparameter sonde to track the important water quality factors in the marine environment. However, the highlight of the system is its four underwater cameras which broadcast live video feeds wirelessly to shore.

López and his colleague Luis Mariscal are the marine telecommunications researchers responsible for implementing the buoy-shore communication system. The cameras are wired to a solar-charged power supply and wireless transmitter installed inside the watertight data well of the monitoring buoy. Each of the four cameras is fixed at a point of interest on the excavation site.

The video feeds are currently available only to project personnel, but the team is currently working on a publicly available display. In the future, the monitoring buoy may also be moved to other similar nautical archaeology sites. “The buoy is meant to be located in whatever underwater site we are working on,” says López. Little by little, this modern technology is helping to uncover centuries-old nautical mysteries.