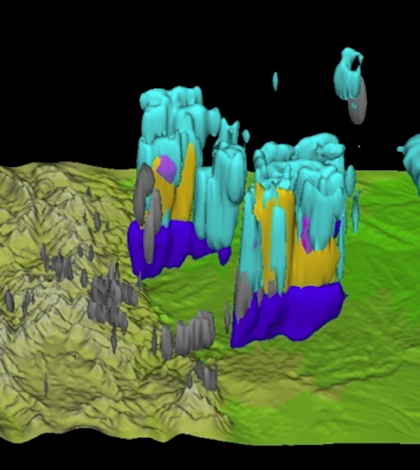 Scientists used the supercomputer to develop this 3-D rendering of a major thunderstorm from July 2011. (Credit: David Gochis / NCAR)

Scientists at the National Center for Atmospheric Research (NCAR) have a new tool to utilize in their work: a supercomputer capable of a staggering 5.34 quadrillion calculations per second. Named the Cheyenne Supercomputer, it outpaces its predecessor by a factor of 2.5.

Admittedly, any supercomputer is fast. But this new one will help in studying complex problems more efficiently, scientists say, like changes in global climate, the formation of extreme weather patterns and rumbling seismic activity.

Some research projects that NCAR scientists plan to use the new supercomputer to study include the solar cycle, which may very well have impacts on the functioning of GPS devices, as well as risks from the outbreaks of thunderstorms.

Support for the Cheyenne Supercomputer was provided by the National Science Foundation. The computer will be housed beginning in 2017 in the NCAR-Wyoming Supercomputing Center, which has been used by more than 2,000 researchers since opening in 2012.