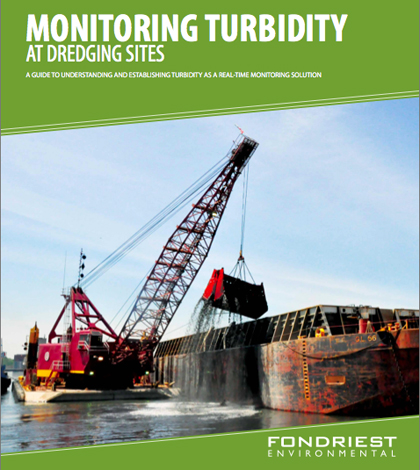 Fondriest Environmental, our faithful publisher here at the Environmental Monitor, has released a guide to turbidity monitoring at dredging sites. The guide is available as a PDF document or in a web format on Fondriest’s online Fundamentals of Environmental Measurements resource.

Fondriest and its partner company NexSens have worked with firms on dredging projects across the country. We’ve covered some of them here on the Environmental Monitor, including a project that began in the fall of 2013 to remove 350,000 cubic yards of polluted mud from the East Branch of the Grand Calumet River in Indiana:

Two hydraulic dredges on the river will be pulling up sediment through 8-inch intake pipes, according to Richard Weber, vice president and principal engineer with Natural Resource Technology. Because the contamination runs so deep into the sediment, complete removal would be cost prohibitive. The project’s partners and their engineers have opted to partially dredge the tainted sediment and place a capping layer over the bed to isolate the remaining buried chemicals from the environment.

Four data buoys–one upstream and one downstream of each dredge–will track turbidity in the river to make sure the operation stays within a compliance level for total suspended solids.

Each NexSens MB-300 data buoy sports a YSI 600OMS V2 sonde with a 6136 turbidity sensor that will take measurements every 15 minutes. The data will be accessible in real-time through a NexSens WQData website.

Though the sensors measure turbidity, the compliance levels are established under total suspended solids. To make the surrogate turbidity readings useful, water samples from the river were recently analyzed for turbidity and TSS to develop a correlation between the two.

The guide covers everything from why it’s important to track turbidity at these project sites, to an overview of U.S. Army Corps of Engineers guidelines, to the technology and design of a typical turbidity monitoring system. From the PDF version of the guide, this spread details a typical real-time turbidity monitoring system.