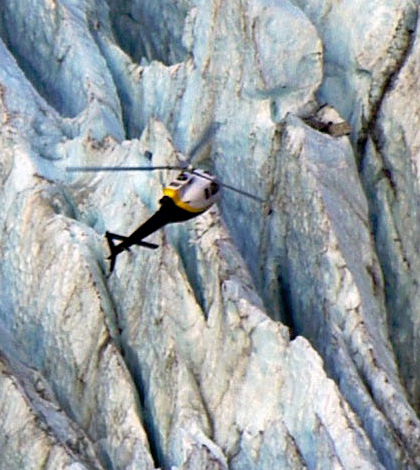 A helicopter takes researchers up to the Franz Josef Glacier in New Zealand. (Credit: Benjamin Lehmann)

A recent study supported by the Swiss National Science Foundation examined New Zealand’s Franz Josef glacier to try to peg down the exponent of the glacial erosion rate law. Researchers found the rate of erosion is proportional to the square of ice-sliding velocity, and so the relationship is nonlinear.

They also found that one process, abrasion, may dominate over other erosion processes when a fast-moving glacier, such as Franz Josef, moves over weak rocks. What this means for the future is the glacier’s ice-sliding velocity will increase in a nonlinear fashion due to its nonlinear relationship with ice flux and surface slope.

One technique that allowed the team to estimate erosion over the entire glacier is called Raman spectroscopy of carbonaceous material. With this tool, the researchers were able to estimate the peak metamorphic temperature of the rock under the glacier based on the fossilized carbon content. They were then able to figure out how, and how much, the glacier has eroded the underlying rock.