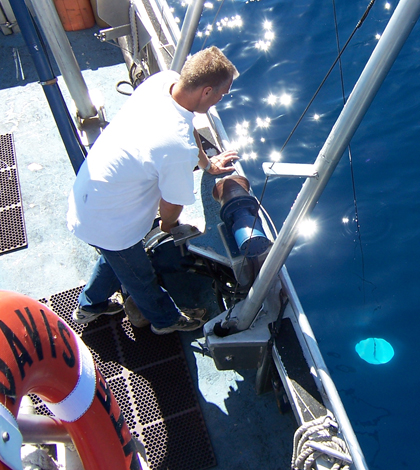 It’s been 150 years since, as the legend goes, an Italian Jesuit priest named Angelo Secchi, lowered a white disk into the water of the Mediterranean Sea until it disappeared from sight and measured the depth as an indication of water clarity.

It would be a little too convenient for Secchi’s experiment on April 21, 1865, to be the first use of the tool that would come to be named for him. According to a 2010 article in the Journal of the European Optical Society, German writer and naturalist Adelbert von Chamisso had sunk a white dinner plate into the North Pacific to measure transparency as early as 1820. But Secchi published thorough results and did so much to refine the methods that the tool took on his name.

It’s easy to marvel at the fact that the Secchi disk is so still so ubiquitous amid the rapidly advancing technology of the water quality monitoring world. But its simplicity is an asset, not a handicap.

The relatively cheap tool and easy-to-follow instructions are what make events like the Secchi Dip-in, an international volunteer program, possible. The Dip-in, sponsored by the North American Lake Management Society, asks members of volunteer water quality monitoring groups to take Secchi readings of their waterbodies during July each year. They’ve been at it since 1994 and now have a database of more than 41,000 records from more than 7,000 lakes, rivers and estuaries across the U.S. and Canada.

The Dip-in program analyzes trends at sites where it has more than five years of measurements. They also make their data available to other researchers, who are happy to have it. One recent example is a study from the University of Florida of nearly 100,000 individual Secchi disk measurements from across the U.S., including records from the Dip-in.

The nationwide analysis found average transparency was less than 1.1 meters in a quarter of the sampled waterbodies, while 10 percent had average Secchi measurements greater than 4.8 meters. The states with some of the most transparent waters were Maine (where they’re particularly proud of their clear lakes), New Hampshire, Vermont, Alaska and Montana. Water was the murkiest in generally agricultural states like Mississippi, Nebraska and Oklahoma.

The Secchi disk is more than just a convenient tool for amateurs. Scientists have measured transparency in the famously clear waters of Lake Tahoe since 1968. The Tahoe Environmental Research Center at UC Davis has since added PAR sensors, which can indicate water clarity by measuring light attenuation. But according to the center’s director Geoff Schladow, who spoke with Environmental Monitor writer Dan Kelly in 2014, the disk still reigns.

[T]he No. 1 way to measure clarity is still with a Secchi disk. This is because taking the measurement is simple, and also because clarity measurements with Secchi disks comprise the longest continual measurement that scientists have for Lake Tahoe.

“From 1968 to about 2000, it’s a pretty much straight-line decrease. But since 2000, clarity has more or less stabilized around the same levels,” said Schladow. “It’s neither getting worse or better, but the fact that it’s not getting worse is a huge achievement.”

And it’s a huge achievement for the Secchi disk to stay relevant throughout 150 years technological progress. If you’d like to get a head-start on the next 150 years of Secchi disk history, pick up one of your own, learn how to use it, and submit your results to the 22nd annual Secchi Dip-in in July.