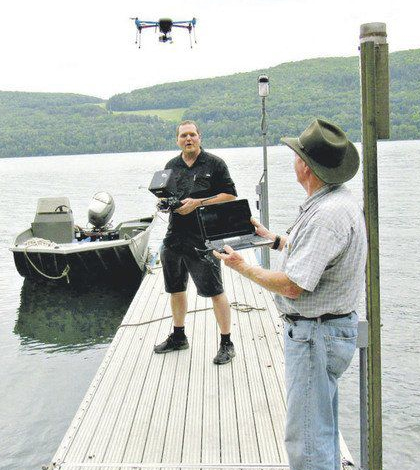 Digital video is of Otsego Lake is streamed from a drone. (Courtesy of the Daily Star)

Otsego Lake in New York is getting clearer these days, but that may not be as such good news as it sounds. That’s because the lake is beset with zebra mussels, an invasive species known for its filter-feeding ways that, though they may make waters clearer, strip out much of the nutrients that algae and other aquatic plants use to grow.

Details on the rise of zebra mussels in Otsego Lake can be found in the 48th Annual Report of the biological field station at the lake, which is overseen by the State University of New York – Oneonta. It shows that the first zebra mussels were documented there in 2007 and charts how they’ve spread since that time.

Scientists at the field station say that visitors to the lake seem to like the increased clarity of the water. But they point out that the beachgoers often don’t understand that the changes they’re seeing aren’t so good for the food chain.

Top image: Digital video is of Otsego Lake is streamed from a drone. (Courtesy of the Daily Star)