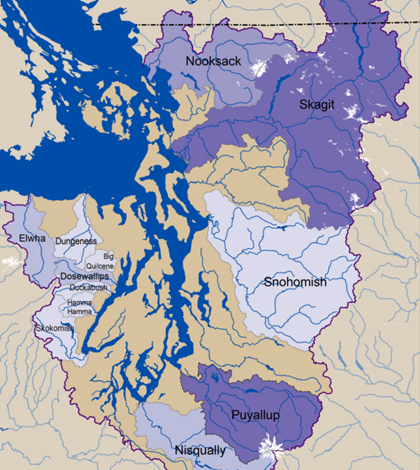 Purple shading shows how much of each watershed's area is covered by glacier. (Credit: Robert Norheim / UW Climate impacts Group)

A new report from the University of Washington details predictions for the future of the Puget Sound watershed under climate change scenarios, according to a release. The watershed stretches from an area west of the Cascades Mountains up to the Canadian border with the United States.

In the report, university officials have synthesized a host of relevant research impacting the watershed. By bringing all of the different studies, and their results, together in a single package, the report makes it easy to assess possible climate change impacts to Puget Sound and its surrounding areas in the next few decades.

Of the predicted impacts listed in the report, U. Washington scientists say some include a rise in average air temperatures for the area of between 2.9 and 5.4 degrees Fahrenheit by the 2050s. They also predict ocean levels could rise by 4 to 56 inches by the century’s end. For the full list of possible climate change impacts on Puget Sound and its watershed, check out the free report.