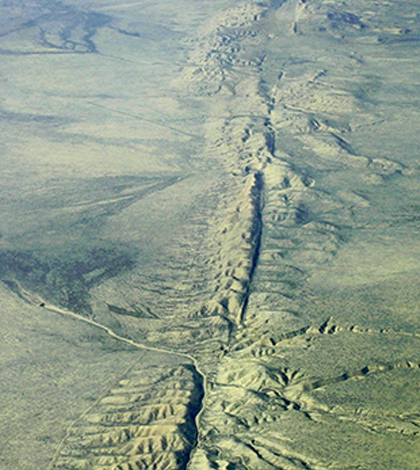 An array of GPS sensors along the San Andreas fault gauges movements of the Earth’s crust around the clock. Sometimes they record large, sudden motions. Other times they measure slow, creeping ones. But all of the data they’ve logged have helped researchers from a number of institutions better understand the behavior of the San Andreas fault.

Scientists from the University of Hawaii, University of Washington and Scripps Institution of Oceanography have analyzed the massive dataset to chart new dynamics of the fault. Housed in the EarthScope Plate Boundary Observatory, data from the GPS network have shown that the San Andreas fault has nearly 125-mile-wide areas of uplift and subsidence.

These regions, though predicted to exist in models, had never before been documented. Investigators say that their movements only constitute motion of just a few millimeters each year that straddles the fault system.

Scientists had some difficulty teasing out the regional tectonic motion from more small-scale, local movements of the fault. To get past that, they focused on the varying vertical motions of the Earth’s crust, ultimately devising a statistical technique to extract the patterns of vertical movements on a large scale from the data. The pattern resulting from the analysis was similar in magnitude and direction to motions predicted by previously published earthquake cycle models.

Results of the work, published in Nature Geoscience, indicate that researchers can use GPS vertical motion measurements to better understand the structure and behavior of faults, even in times of reduced earthquake activity. And as scientists continue to monitor the San Andreas fault for indications of the next big earthquake, the findings will help constrain seismic hazard estimates and may allow for better mapping of the large-scale motion resulting from large ruptures of the San Andreas in the future.

Support for the work was provided by the National Science Foundation.