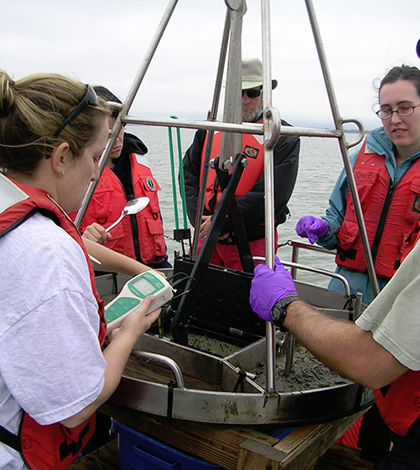 Researchers look for the source of contaminants in the San Francisco Bay. (Credit: University of Minnesota College of Science and Engineering)

A study led by the University of Minnesota has found that there is a class of water contaminants present largely due to indirect human actions, according to a release. The contaminants in question are polybrominated diphenyl ethers (PBDEs). They are toxic and hormone-disrupting to marine animals in large quantities, but can be produced naturally by marine bacteria and algae.

With levels of the contaminants found to be increasing in ecosystems over time, and even found in fish, scientists began searching for the cause. They considered flame retardants as well as common bacterial agents, which are related to PBDEs, and manufacturing facilities, wastewater treatment plants and precipitation events. All of these contribute to PBDEs, so scientists hypothesized that their findings would indicate human-related pollution as the cause.

They tested their guess by gathering sediment cores in parts of San Francisco Bay, Point Reyes National Seashore and freshwater lakes in Minnesota. The lakes were unaffected by PBDEs, followed next in severity by the National Seashore — levels there were deemed possible naturally. The highest were found in San Francisco Bay, leading researchers to conclude that higher nutrients and water temperatures there could influence microbial activity in the bay and make human-related PBDE pollution worse.

Top image: Researchers look for the source of contaminants in the San Francisco Bay. (Credit: University of Minnesota College of Science and Engineering)