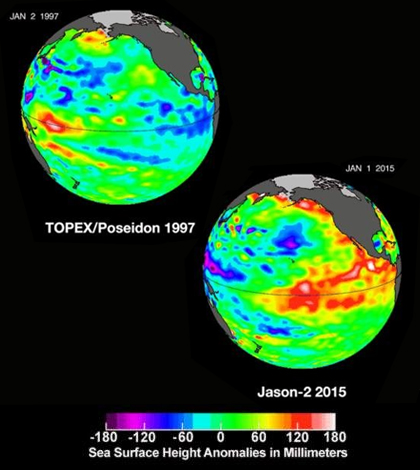 Researchers from California State University – Fullerton are predicting that this year’s El Niño will bring the potential of extreme flooding and rainfall for the state, according to a release. The odds are very good, they say, especially since all indicators so far hint at the likelihood that it may be the strongest El Niño event on record.

Several scientists from the university, including those who dissect climates of the past using lake sediment cores as well as others who study changing ocean temperatures, agree that this year’s El Niño will have big impacts on California’s weather. This year, they say, brings unusual conditions not documented in past events.

These include parts of the northeast Pacific Ocean that are much warmer than average. In other areas of the ocean, surface temperatures have cooled, setting up a warmer phase of the Pacific Decadal Oscillation. The phases can last for multiple decades and tend to contribute to more frequent and strong El Niños.