Scientists Use Wild Rice as Miner’s Canary in Minnesota Waterways 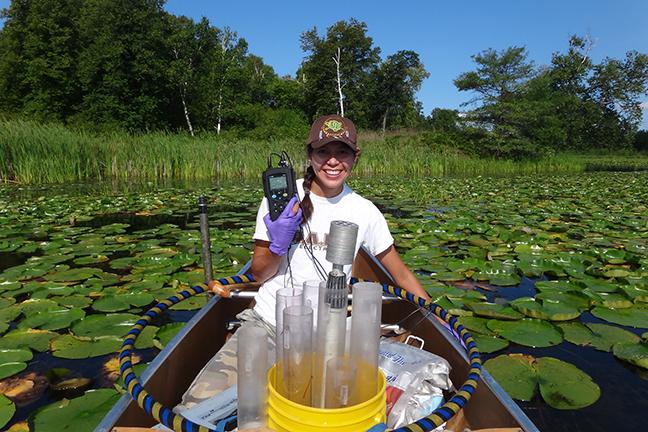 A team member sampling among the lily pads in a Minnesota waterway. (Credit: University of Minnesota)

A University of Minnesota research team has unraveled some of the mysteries surrounding sulfate in waterways by studying wild rice. They have learned that sulfate, a compound found in waterways thanks to anthropogenic activities such as mining, farming, and burning fossil fuels, as well as natural geological sources, is converted into toxic levels of sulfide. In this form it increases other harmful elements, such as methylmercury, which contaminates fish. As such, wild rice can help scientists, serving as the “canary in the coal mine,” or flagship species, clueing humans into how our activities are changing the environment around us.

Wild rice is both culturally and ecologically important in Minnesota. It plays an important role in Native American cultures, and provides food and habitat for various species of wildlife. And while sulfate is itself generally perceived as benign, this new work indicates that it actually leads to more serious consequences than previously thought. Amy Myrbo, a University of Minnesota research associate in the Department of Earth Sciences and the lead author of two of the recent studies, communicated with EM about what inspired the work.

“Research by John Moyle in the 1940s showed that strong wild rice stands did not occur in waters with over 10 mg/L sulfate,” Myrbo explains. “In the early 1970s, a Minnesota rule was enacted prohibiting discharge of water with >10 mg/L sulfate to waters used to grow wild rice. Sulfate has been released from iron mining tailings basins for decades, which has evidently destroyed or reduced wild rice populations; others have been lost as a result of land use changes such as ditching to drain wetlands for agriculture.”

Although scientists knew back in the 1940s that wild rice grew best in Minnesota lakes that were low in sulfate, nobody knew why, and the relationship was mysterious, because sulfate isn’t very toxic to animals or other plants.

“There is a little literature on these effects of sulfate—there’s a table of everything we could find in the supplementary materials of the paper that deals with these effects—but to our knowledge we’re the first to note all of these effects, and to see them so clearly,” Myrbo details. “And yes, I think that these are alarming findings, given the many possible sources of sulfate to freshwaters, and the perception that it’s benign. Probably the hot spot for related research has been in the Netherlands, where (higher-sulfate) surface water has been used to fill wetlands that have been depleted by (low-sulfate) groundwater drawdown. There, major changes in aquatic vegetation have resulted.”

The team discovered that the problem is sulfide, which wetland soil converts sulfate into—the same soil that wild rice prefers to germinate and take root in. An annual plant, wild rice seeds drop during fall into wet soil, and then the plant sprouts anew each spring from those seeds. However, during that waiting time as the winter passes, anaerobic microbes in the soil turn sulfate in the overlying water into sulfide. Wetlands, streams, and lakes whose sediment hosts high concentrations of dissolved sulfide are unlikely to become homes for wild rice. The team also found that the sulfates also trigger accelerated decomposition of plants along with the conversion to sulfide, releasing nitrogen and phosphorus, and fertilizing the water. This in turn changes the plant portion of the local ecosystem, typically causing more algae blooms. The same microbes that convert sulfate to sulfide also produce methylmercury—the variety that ends up in fish that humans eat, posing a health risk.

The presence of sulfate therefore sets off a number of events in a chain reaction.

“I think sulfate is so powerful because the molecule basically takes the place of oxygen; in other words, it’s a terminal electron acceptor that allows additional organic matter to be decomposed even after oxygen is depleted,” Myrbo remarks. “So everything that’s in organic matter comes back out into the water column. The methylation of mercury is separate, and just a coincidence that it’s some of the same microbes that both reduce sulfate and methylate mercury.”

Getting to the bottom of the wild rice mystery

The team collected and studied water samples and sediment over three summers in 2011, 2012, and 2013. They collected their specimens from more than 100 Minnesota streams and lakes, either where wild rice already grows, or where it should be growing based on the presence of favorable conditions. Many of the sites were located in places where sulfate does not occur naturally, in northeastern Minnesota. At every site, the researchers took more than 100 measurements, studying sediment cores, surface water, water in the sediment, and various plant species. They analyzed the chemistry, transparency, and depth of the water at each site.

Even when other conditions were ideal, wild rice didn’t grow where sulfate levels were high. Some of the sampling techniques were very labor-intensive.

“Basically, we measured everything that we could, so that we could investigate all the options statistically,” Myrbo states. “I feel that the most important (and most challenging!) measurements were the porewater measurements. For these we used devices called Rhizons, which are basically small, cylindrical hard filters with a tube that runs out to a syringe or evacuated serum bottle. They are often used to sample soil moisture. We used them to sample porewater anaerobically—which was absolutely critical for preserving reduced species including sulfide and dissolved iron. The Rhizons are easy to use, though it sometimes took a few hours to pull enough water (30-100 mL) for our analyses. But it was largely unattended time, and the field crews got used to it, and would set up the porewater sampling as soon as they got back to shore and then do all the other sample processing they needed to do. But they still had some downtime at some sites where the Rhizons ‘sipped’ the porewater slowly—it seemed to depend on how fine-grained the sediments were. But it was a really worthwhile kind of sampling to do.”

The field research the team conducted revealed similar effects of sulfate on water quality to those produced in the lab with mirrored studies in tanks. “The other principal investigator, John Pastor, of the University of Minnesota, Duluth, ran mesocosm and hydroponic experiments on sulfate/sulfide and wild rice,” details Myrbo. “You can find his paper online. For our paper about mercury, we sampled all of those mesocosms over two days to understand what happened to the chemistry of the water, porewater, and sediment at different sulfate treatment levels.”

Implications for policymakers and others

Minnesota is unique among states and Canadian provinces in having a water quality standard for sulfate regulation, but this danger is certainly not limited to Minnesota.

“The problems with sulfate will occur anywhere sulfate is released to lake/wetland ecosystems that have enough organic carbon to enable sulfate reducing bacteria to do their thing,” Myrbo explains. “And that means virtually all lakes and wetlands (except for very large, low-productivity lakes). I can’t really speak to the policy-making process, but I feel that regulating sulfate should be considered in other places—and for other reasons besides wild rice protection.”

This is important to recognize, because sulfate in water has other consequences, including changes in habitat for ducks, more mercury in fish, and other changes in the food chain. Along these lines, this is in a sense the beginning of this line of research for Myrbo and some other team members. So what’s next?

“A different group, with a few of us in common, were recently awarded a UMN ‘Grand Challenges’ grant to further investigate these topics and others related to wild rice and water quality—with the research questions and methods determined by our Native American tribal partners, both principal investigators on the grant and tribal resource managers around Minnesota and the Great Lakes region,” Myrbo reveals. “Find out more about that project, which just started last month, here: https://wildrice.umn.edu/.”