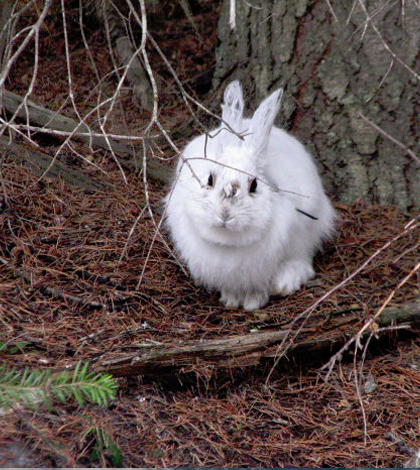 Climate change, as its effects are currently felt, aren’t so bad for snowshoe hares. But in the future, these animals that rely on long periods of winter to determine when they should switch from white fur to brown will likely be in more trouble.

According to scientists at North Carolina State University studying the bunnies, the risk of being eaten goes up by 7 percent for each week that a snowshoe hare stays white after the snow has melted away. Combine that morbid rate with an increase in global temperatures and shorter winters to come, and things aren’t looking good for the animals.

Over the course of their study, NC State researchers found that snowshoe hares that have yet to turn back to brown are oblivious to the fact that they stick out so much. The investigators found, in fact, that the animals just assumed that they couldn’t be seen, permitting scientists to get right up next to them for observation. Missing this key factor may very well spell worse declines for populations of snowshoe hares in the future. But hopes are that snowshoes can begin adapting to the change in conditions and begin to switch their fur coloring earlier.

Full results of the investigation are published in the journal Ecology Letters.