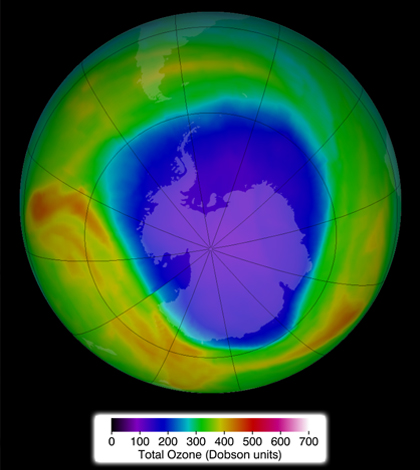 The size of the ozone hole resting over the Antarctic this year is about the same as it was last year, according to a release from NASA. The space agency reports that the size of the hole in 2014 is 24.1 million square kilometers, an area similar to the size of North America.

In 2013, the hole was a little smaller, coming in at 24 million square kilometers, which is still smaller than those measured in the last two years. The decreases, experts say, coincide with a drop of chlorofluorocarbon concentrations over the continent.

Data on the ozone hole are collected by an ozone monitoring instrument deployed on NASA’s Aura satellite, as well as an ozone profiler on the Suomi National Polar orbiter. Scientists at South Pole Station regularly deploy ozone-sonde balloons to track the hole as well.