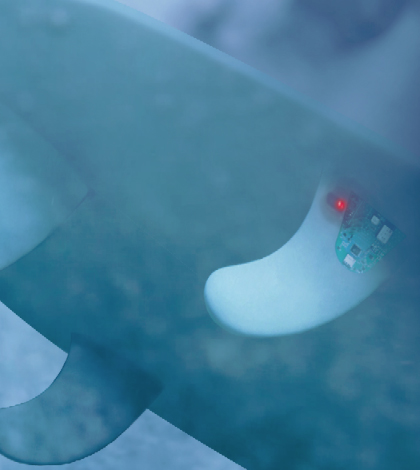 There are many new and emerging technologies out there for studying the world’s oceans, no matter how deep the investigation. But what about the areas nearer to shore? It seems that there is a lack of tech out there for dissecting its dynamics.

Approaching the issue isn’t easy, but an environmental company is taking a stab at it, offering what is called the Smartfin, a fin that attaches directly to all existing surfboards. After rigging up the fin, surfers can become citizen scientists while they catch waves, as the device gathers data on the nearshore’s temperature, pH, salinity, waves and GPS location.

Data collection begins automatically once the Smartfin makes contact with water. All gathered information is stored onboard until the user makes it back to shore, at which point the fin syncs up with a server via a smartphone’s Bluetooth connection.

Makers of the Smartfin, Lost Bird, are teaming up with researchers at the Scripps Institution of Oceanography who are finding ways for the scientific community to use the data. The device may also be offered commercially in the future.