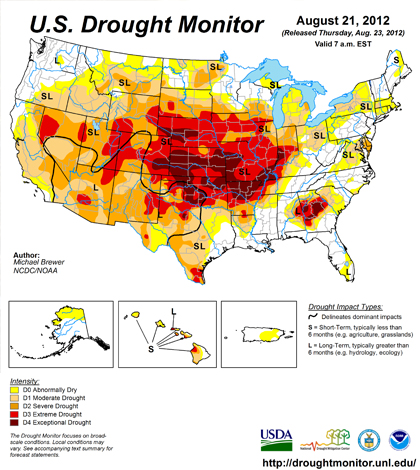 In 2012, great areas of the Midwest and the Rocky Mountains were under drought. It was one of the most extreme dry periods the region has ever experienced. But those living in the region could have had more warning before the drought hit, according to research published by scientists at the National Center for Atmospheric Research focusing on soil moisture and snowpack.

Seasonal drought forecasts issued in May 2012 for the upcoming summer did not foresee a drought forming in the country’s midsection. But by the end of August, a drought that had started in the Southern Rockies had spread across the Midwest, parching Kansas, Missouri, Nebraska and Oklahoma.

To explore the connections among snowpack, soil moisture and drought, researchers analyzed data collected between 1980 and 2012. To supplement those observations, they also explored the connections using a new NCAR-based community Weather Research and Forecasting model dataset comprising 24 simulations of the period from 1990 to 2000 as well as for 2012.

Each simulation was run with small tweaks to the way the model represents atmospheric physics, providing scientists a broad look at different climate scenarios that could have plausibly occurred during the study period. Investigators evaluated the strength of relationships between snowpack, soil moisture and drought from there.

The researchers found that a full four months of warning could’ve been realized had data on snowpack and soil moisture been considered earlier. That could have given farmers, water managers and others a great deal more time to prepare.

While observations of snowpack and soil moisture could have helped better predict the 2012 drought, scientists note that the method does not replace other drought-prediction measures. Especially for more large-scale phenomena leading to drought, other tools remain highly useful.

Full results of the investigation into snowpack, soil moisture and drought are published in the Journal of Geophysical Research.