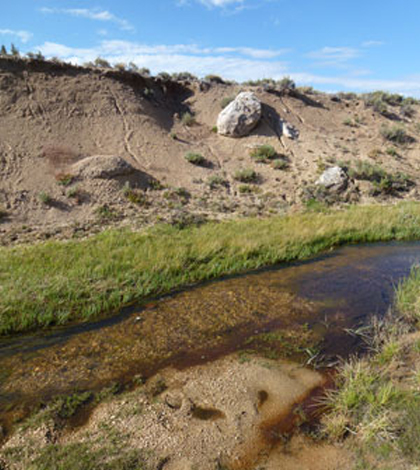 Anglers know that streamside vegetation is important to fish, but now science has proven it as a fact, at least for one species of fish in California. The golden trout, which just so happens to be the state’s official fish, has been found to thrive most easily in cooler waters with more surrounding streamside weeds.

Researchers at the U.S. Forest Service made the find through a long-term study considering streams and their temperatures near three meadows sustaining livestock grazing in the Golden Trout Wilderness. The area was named a wilderness with the purpose of providing golden trout with usable habitat.

All of the meadows had been home to intensive grazing for generations, but the installation of a new enclosure off one of the meadows allowed scientists to chart differences between areas of stream with more surrounding vegetation or less. In addition to considering the weeds and their densities growing around the streams, researchers also gathered temperature measurements of the streams under study.

Temperature measurements were taken using Onset HOBO temperature loggers deployed at sites throughout the streams. The vegetation was assessed by taking height measurements and coupling those with GPS data on each willow plant.

Essentially, researchers found that land use can interact with climate change to intensify warming in high elevation meadow streams, and protecting and restoring streamside vegetation can help keep streams cool for the California golden trout.

Inside the enclosed area, the riverbank vegetation was found to be much larger and denser than that found outside of it. This provided more shady waters and cooler temperatures than areas outside the enclosure, researchers found.

Investigators involved in the work say that their findings show the role that streamside vegetation plays in maintaining low stream temperatures and that enhancing and protecting streamside vegetation may help to ensure that streams have the resiliency to withstand future climate warming that can lead to stressful, and possibly lethal, stream temperatures for golden trout.

Full results are published in the open-access research journal PLOS ONE.