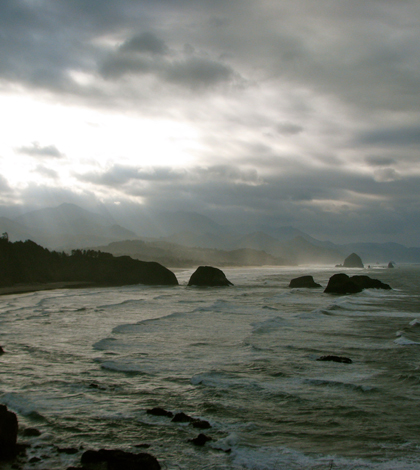 The Oregon coast as seen from Ecola State Park (Credit: Jeff Gunn, via Flickr/CC BY 2.0)

A study led by researchers at the University of Washington calls into question the role of human activity in the warming of the Northwest U.S., according to the New York Times. Scientists at the National Oceanic and Atmospheric Administration also contributed to the work, which has been published in Proceedings of the National Academy of Sciences.

The analysis looks more closely into wind, temperature and barometric pressure data for an expansive region of the Pacific Ocean that touches California, Hawaii, Oregon and Washington. Researchers examining data from 1900 to 2012 found that a very strong relationship appears to exist between winds and changes to ocean temperature.

A link to a warmer Northwest appears to emerge as shifts in ocean temperatures likely affect air temperatures in the region. But even though the correlation between wind and ocean temperatures was “quite amazing” as the study’s lead author said to the Times, he pointed out that the findings aren’t a commentary on the origins of climate change overall.

Image: The Oregon coast as seen from Ecola State Park (Credit: Jeff Gunn, via Flickr/CC BY 2.0)