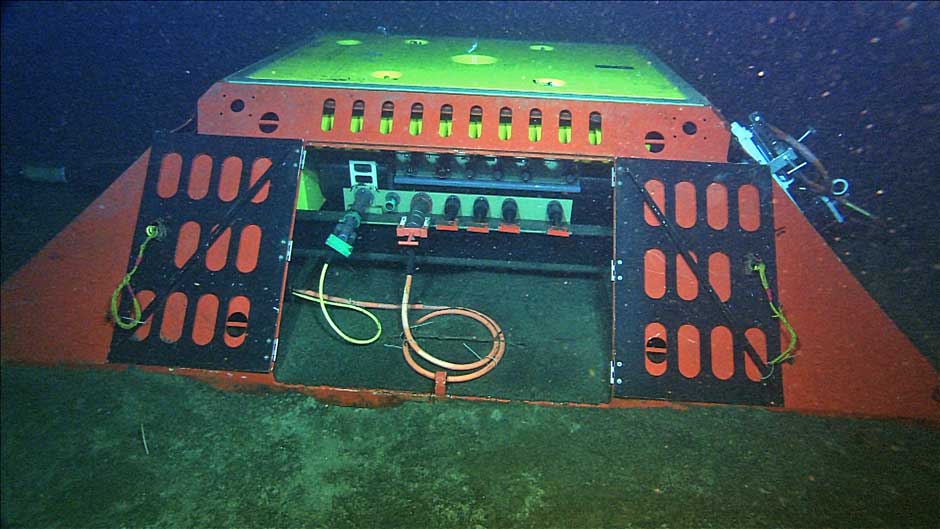 This image shows the "main science node" of the Monterey Accelerated Research System (MARS) ocean observatory in Monterey Bay, California. The main science node serves as a power and data distribution center for instruments attached to the observatory by underwater "extension cords." A larger seafloor cable connects the science node with a gigbit ethernet connection and 10 kilowatts of power from MBARI facilities in Moss Landing. (Credit: © 2009 MBARI)

Engineers and scientists that specialize in aquatic measuring practices always meet extra costs on the path to deployment. Maybe it is the corrosive nature of the saltwater, or the unbearable pressure tools must be equipped to handle while lying on the ocean floor.

For anyone interested in hooking up with the MARS (Monterey Accelerated Research System) Observatory, which rests dozens of miles off the California coastline, the costs extend further. They get so high that only well-funded universities and governmental agencies can afford to connect with the underwater power and data hub.

Hoping to lower that cost, engineers with the Monterey Bay Aquarium Research Institute (MBARI) constructed a wireless device called Deep-Sea Connect. This inexpensive node of power and data transmissions will make it easier to deploy environmental sensors at a fraction of the cost.

“Any time you have to deploy something in the ocean, there’s a lot of associated costs,” said Operations/Technical Support Manager Craig Dawe. “A ship capable of servicing an observatory is going to cost you $20,000, plus a day.”

It can cost up to $10,000 per side to manufacture underwater connectors that will hook up with the observatory. If a group wants to use fiber optics, the costs extend to about $100,000.

“That takes the cost of connecting to observatories – whether it’s MARS or anybody else’s – out of the realm of most less well-funded institutes, such as community colleges or high schools,” Dawe said. “This was a way to address that need.”

The Deep-Sea Connect is housed in a small fiberglass frame that is designed to withstand ocean-sized pressure. Equipped on its sides and on top are plastic paddles that emit radio signals to transfer both power and data. Using power transmitters sold by Seattle-based WiBotic, Dawe and French packaged them inside molded cast resin – a structure that can withstand the pressures lying on the seabed.

(Left) This image shows the Deep-Sea Connect system (foreground) and the Raspberry Shake seismometer (background) just before the instruments were connected to the MARS observatory. (right) This image shows the manipulator arm on ROV Ventana placing a wireless connector “paddle” from the Raspberry Shake on one of the paddles on the Deep-Sea Connect system. (Credit: Both images, 2020 MBARI)

After deploying in December 2019, MBARI engineers first connected a mini-seismometer to the Deep-Sea Connect – their first venture into inexpensive underwater environmental monitoring.

Their trial run included a Raspberry Shake microprocessing board, a variant of the Raspberry Pi computer. The shake detects tremors in the ocean, which provides key Earthquake data. The MARS observatory seismometer is the world’s only Raspberry Shake underwater.

Some challenges the team overcame included finding a way to transmit signals through both casting resin and water, two mediums standing between free-flowing seismic data and the receiver on land.

Another issue came from the system’s charging batteries. When the devices dumped excess energy, it was released in the form of noise, which registers as a constant whir on the shake’s citizen science station network.

Other than the cost, the transmitters on Deep Sea Connect also make it easier to operate. For anyone using fiber optics or even plugging a cord into an electrical outlet at home, it requires what Dawe calls “precision alignment.” The three ports on Deep Sea Connect, which is actually split from a single port on the MARS observatory, require only that transmitters are “grossly aligned.”

This, along with a connecting cost “nowhere near $10,000,” will grant institutions around the country access to a mountain of potential data capable of being collected by the MARS observatory.

“Some of the things we’ve done on MARS has become semi-permanent study sites,” Dawe said. “For about six years, we had a seismometer deployed – it was part of the California Seismic Network, run out of the Berkeley Seismology Laboratory.” 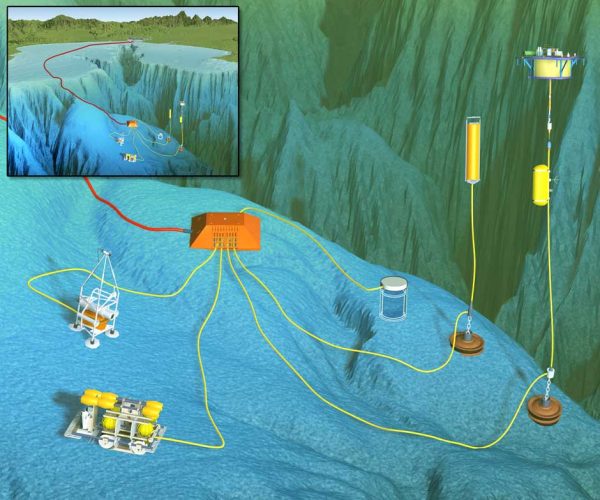 Previously the observatory also had a high-temperature pH sensor from the University of Minnesota. A bottom-pressure recorder from a university out of Oregon, as well as a geodetic seismic sensor module for the University of Washington.

Currently, there’s a pair of hydrophones attached to the observatory, one capable of registering noise and the direction it’s coming from. There is no end date for them at this time.

“As long as there is funding support from the National Science Foundation (NSF), we will keep the MARS observatory operating and make available its capabilities to the community,” Dawe said. “We are going to deploy this May, a Quest Institute educational platform, which works with high schools.”

“They’re putting together a proposal to put a platform on MARS that they could use to develop lesson plans and teach kids about ocean science. I think it’s fantastic,” he added.

Initiatives like these strike at the core of what MBARI is after in its decision to make the observatory more accessible. Opening up new opportunities for students and less well-funded groups would expand the range of individuals that would benefit from seeing environmental monitoring in action.

“Building Deep Sea Connect has been an adventure. It is something we have tried to do in one form or another here at MBARI for the past 15-20 years,” Dawe said. “It’s come with varying degrees of success. All of this is sort of a culmination of that work.”