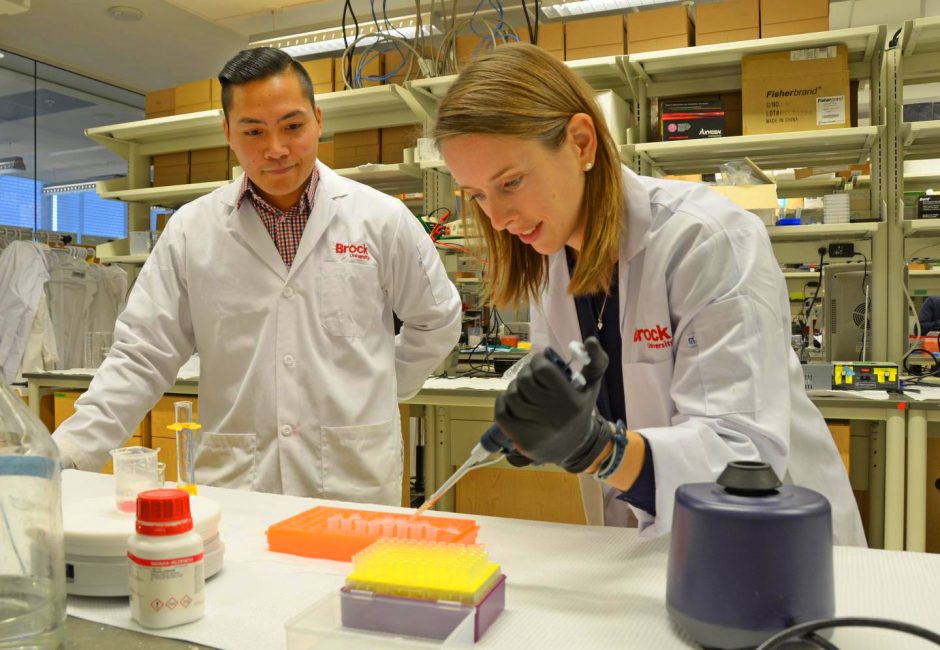 Fajardo and MacPherson in the lab. (Credit: Brock University)

Sometimes one line of inquiry in science opens up interesting solutions in another area, as recent research from a Brock University, Canada team illustrates. There, postdoctoral fellow Val Andrew Fajardo was keen to explore the health effects of lithium in water based on his background in physiology.

“My interest in lithium stemmed from its ability to inhibit a protein called glycogen synthase kinase 3 (GSK3),” explains Fajardo. “By training, I am a skeletal muscle physiologist, and studies have shown that in skeletal muscles GSK3 can be targeted to oppose obesity and diabetes. As I read more about lithium and its role in inhibiting GSK3, I stumbled across several ecological studies showing these negative relationships between trace levels of lithium in tap water and rates of suicide, crime, and homicide across several different regions. Given lithium’s well-known role as a mood stabilizer, these associations were not entirely surprising, but it had me questioning whether trace levels of lithium in tap water would also negatively associate with the prevalence of obesity and diabetes.”

His next step was to team up with another expert—someone who could complement his own experience and background.

“Along with these effects, lithium is also known to have neuroprotective effects that can be used against Alzheimer’s disease,” clarifies Fajardo. “So it was extremely convenient and advantageous to team up with Dr. Rebecca MacPherson, who not only studies Alzheimer’s disease but also focuses on its relation to obesity and diabetes.”

Assistant Professor of Health Sciences, Rebecca MacPherson, is also at Brock University. Along with several others, the two took on this research. The team gathered statistics from 234 counties all over the state of Texas on lithium levels in drinking water.

“The simple truth as to why we picked Texas is because the data were readily available,” Fajardo comments. “These lithium concentrations can be found online from the Texas Water Development Board Groundwater Database: Water database. The data pertaining to the prevalence of obesity, diabetes, and Alzheimer’s disease mortality are also readily available online.”

Lithium, an alkali metal which is water-soluble, is found in mineral springs and igneous rocks. It is often used to treat mood disorders, but that kind of treatment demands much higher doses than the trace amounts that occur naturally in drinking water.

The team compared naturally-occurring lithium levels in tap water with the incidence of diabetes and obesity, and mortality rates from Alzheimer’s disease, in Texas counties. They found that counties with traces amounts of lithium above the median level—40 micrograms per liter—experienced less frequent incidence of Type 2 diabetes and obesity, and fewer deaths from Alzheimer’s disease over time.

“Correlating lithium concentrations in tap water with health outcomes has been done well before our study with implications for mental health and even cardiovascular health,” Fajardo points out. “There are reports from the 1970s demonstrating a negative association between trace lithium and deaths due to cardiovascular disease across several large U.S. Cities.”

This is, however, the first study to demonstrate that lithium may have a protective effect against Alzheimer’s disease, diabetes, and obesity via trace amounts in tap water throughout a population.

This research was published soon after a study from the University of Copenhagen that connects high levels of lithium in drinking water and drops in dementia rates.

“The Copenhagen study was published while our study was already under review,” explains Fajardo. “We think that it’s great that we are reporting similar ideas with trace levels of lithium providing neuroprotective effects across two different regions, as it does provide generalizability to these findings.” Next steps and more questions

One question to ponder is how commonly lithium is found in drinking water in the US, and at what levels; in other words, are the levels seen in Texas unusual?

“Lithium is commonly found in drinking water,” Fajardo states. “However, the concentrations do vary from region to region, which allowed us and other researchers to perform our correlational studies using naturally found variations of lithium.”

According to maps of lithium concentrations produced by the USGS, the amounts found in Texas are unusually high compared with the rest of the nation.

“I can only comment on the data I’ve seen from our study and previously published studies,” cautions Fajardo. “From what I have seen, the levels of lithium found in drinking water are well below (hundreds-thousands) the typical dose (900-1200 mg per day) used to treat bipolar disorder.”

Does this mean that someday soon we’ll be getting a little pick-me-up in the form of lithium from our taps? Not so fast, warns Fajardo.

“I wouldn’t say that lithium could be used as an additive for the population at large—there is so much more that needs to be done,” Fajardo clarifies. “Our study is ecological in design and depicts correlations at best; so future studies need to assess cause-and-effect with larger scale intervention trials. I think what is unique about our study is that it adds further evidence towards trace dose lithium having protective effects against Alzheimer’s disease and that it may also be working through improvements in metabolic function.”

The question of whether there are any subgroups of people for whom these normally beneficial levels of lithium could be counterproductive or dangerous is a research question for the future.

“This is a good question and something that should be looked into with future studies—again with a particular focus on trace doses of lithium,” Fajardo emphasizes. “This also adds justification as to why it is important to determine the molecular pathways that are affected by lithium as it can be used to tease out why there may potentially be some pharmacogenomic differences, for example non-responders.”

“There is so much more work that needs to be done. The one thing that our study and [the Copenhagen] study did do is open up more questions.”