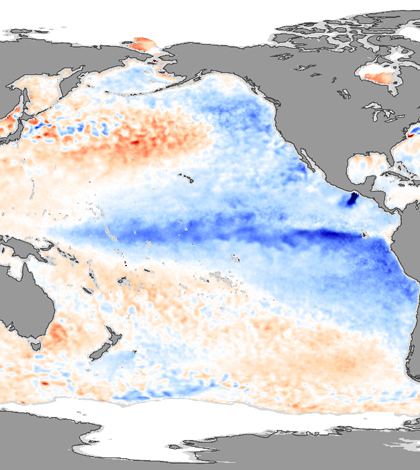 With El Niño waning, a question on the mind of a few meteorologists is whether La Niña will take its place. According to a release from Washington State University, the data indicate that La Niña is probably on its way.

Sea surface temperatures are continuing to go down in the tropical Pacific Ocean, scientists say. When combined with outlooks from climate models, including those made by officials at the National Oceanic and Atmospheric Administration, it looks increasingly likely that we’re in store for a strong La Niña.

Shifting from El Niño into La Niña is significant because of the impacts it can have on the world’s weather. Instead of the weather patterns that we saw last year, La Niña can bring about weather that’s largely the opposite of El Niño. So in places where there was drought, heavy rains may be on the way. And in areas that have experienced heat waves, cooler temperatures could be on the horizon.