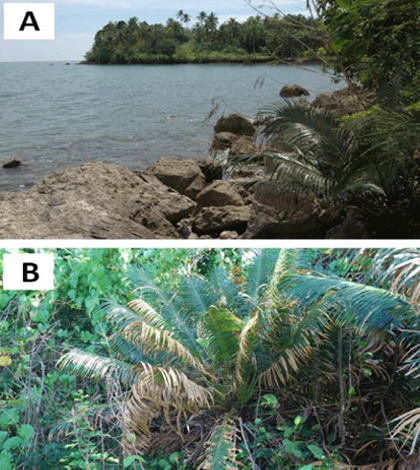 When Typhoon Haiyan struck the Philippines in November of 2013, a team of researchers went out the next month to examine how one coastal tree, Cycas nitida, was affected by the storm. For many plants, leaves are regularly shed and grown anew. When a leaf is no longer useful, the plant must take some of the nutrients back in a process called nutrient resorption.

This usually results in nutrient-poor litter that detritivores decompose at a certain rate. In this case, however, many healthy leaves were knocked from the trees along with the senescent ones. This means that the soil received a larger pulse of nutrients than it was used to and that they could be released at a faster rate.

The team also found that when leaves were partially killed, but stayed on the tree, their nutrient status was identical to that of healthy leaves. This indicates that the storm impaired the trees’ ability to resorb nutrients from their leaves. Finally, the researchers found that the nutrient content of the soil seemed to have an effect on how the plants dealt with nutrients in their leaves.